Buster Keaton was unique for personally doing all of the famous stunts shown in his films. Unlike other actors, he didn’t use a double. He took greater risks in these stunts then any other actor. As a result he was injured in some films and nearly drowned in a movie as well. In the film The Electric House (1921) he 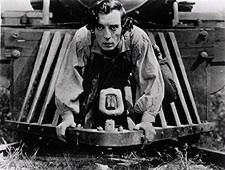 caught a slap shoe in an moving escalator and injured his foot. In the move The General (1926), during a canon scene, he was knocked out by a cannon. He later had a broken nose and even a neck fracture in Sherlock Jr. (1924). The fracture wasn’t discovered for several years after.

The near death experienced happened in 1923, in a silent comedy Our Hospitality which was released by Metro Pictures Corporation. It’s a story based upon the real Hatfield and McCoy feud, but in slapstick. The movie was a family affair. Buster’s wife played the heroine, his son was the baby in the movie and his father played the role of a locomotive engineer.

In this movie there is a scene where Keaton is on a railroad car and has to jump off into a roaring river. Keaton and his assistant had decided they would use a rope tied around Keaton’s waist to protect him from from carried off by the river and drowning. The rope had enough slack to allow Keaton to be seen on film. The other end of the rope was secured. However, they underestimated the force of the river and Keaton was trapped under the water in the river when the rope broke. He was saved from drowning only because he was lucky enough to grab a tree limb and hang on until he could be rescued. Keaton always insisted the camera was to continue to film him no matter what happened. As a result this real life near drowning is part of the movie.

His later life took a turn for the worse. When Buster moved from independent films to working for MGM he  was unhappy with the arrangement. Even though it was prohibition, he began drinking too much and his personal and professional life went down hill. His wife divorced him in 1932 and MGM fired him. He was forced to file for bankruptcy. He even was in a sanitarium for a time. However, using his vaudeville training, he got out of a straitjacket and escaped. However, Keaton managed to turn his life around and to his credit, he quit drinking cold turkey. He found work making an occasional short film and also worked as a gag writer to support himself.

Then Life Magazine did an article about him and he was rediscovered. His old films began to be shown on television and he had appearances on television. He even had The Buster Keaton Show in the 1950's but it didn’t last. Over the years, he had small roles in different television programs, was in some stage productions and made some cameo appearances in some films.