Reporter Gary Kubota has written a story in the Hawaii Star Bulletin about five men who went fishing in a small boat, the Sarah Joe, off Wailuku in Hawaii some thirty years ago and were never seen again. What makes the story compelling is that nine years after their disappearance a grave with a cross was found two thousand miles 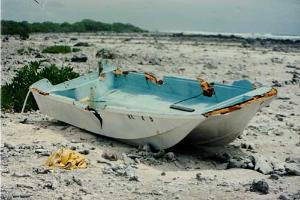 away in the Marshall Islands that held the remains of one of the men, but no one knows what happened to the other men or how the body came to be buried so far away.

Kubota writes that the five, Benjamin Katama, age 38, Scott Moorman age 27, Patrick Woessner, age 26, Peter Hanchett age 31 and Ralph Malakini age 27 were never seen after leaving on the fishing trip. The men were close friends who had all been working together building a house for Malakini. On February 11, 1979 they all decided to take the day off to go fishing. They borrowed a seventeen foot Boston Whaler, named, Sarah Joe, with an 85 horsepower outboard from the twin brother of one of the men. The sea was flat calm and it was a clear day when they started out. However, by One PM that day, the wind was rising and by nightfall there had developed a violent storm that had become a gale. A brother of one of the men said it was the roughest he had ever seen the sea get in that area. Swells of forty feet, sometimes breaking at the crest with winds of more then forty miles an hour made searching next to impossible. Never the less, friends of the men and the Coast Guard risked their lives looking for them. The Coast Guard searched for four days and the families of the men continued searching daily for weeks afterwords, but found nothing. Currents in this area are swift and the search area became to large to search carefully.

In 1988 a biologist with the National Marine Fisheries Services was on the Taongi atoll in the northern part of the Marshall Islands. John Naughton was on an inspection trip there in 1988. He spotted a battered boat and recognized the numbers on the hull to be an Hawaii registration. He found near the boat a grave of heaped stones marked with a cross made of driftwood. Nearby was a pad of notepaper interleaved with aluminum foil, but without any writing on it. The registration numbers turned out to be that of the missing boat. Later examination of the body confirmed it was Scott Moorman, one of the missing men. By coincidence, Naughton had been one of the searchers years before who had looked for the missing men.

No one knows to this day how the boat got there or who buried the body nor what happened to the other four men. Nor is there any way of knowing if Moorman was alive when he reached the island that does not have water on it. A private investigator who later examined the island where the body was buried speculates that Chinese fisherman found the body and buried it, but didn’t report it because they were illegally fishing in the area.

The brother of Ralph Malakini has kept the battered boat in his backyard in Hawaii since it was found as a memorial. He says he thinks Moorman might have tied himself to the boat during the storm. He says he doubts anyone could survive a 2,000 mile journey to Taongi where the boat ended up.

A plaque has been put at the place where the boat was found and at Hana Bay where the fishing trip began, honoring the men. On February 21st a memorial ceremony was held at the bay where they started out.

Another mystery of the sea that will never been known in this life.

2 thoughts on “THE MYSTERY OF THE SARAH JOE”