We are in Scottsdale closing down our house for the summer. Just like a Prairie Home Companion’s news from Lake Woebegone, here are a few items hot off the Scottsdale press.

About twenty two miles North of us is the town of Cave Creek, population about 5,000 people. A quaint town worth visiting for its many shops, places to eat and general charm. Shortly before we arrived the 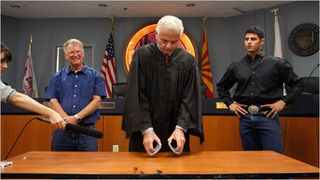 results of a contested election to the Town Council were announced. Thomas McGuire, age 64 was the two term incumbent on the Council whose opponent was Adam Trenk, age twenty five. Trenk was a law student and newcomer to town running in his first political campaign. McGuire was a retired science teacher. The townspeople differ about things like preserving horse trails and plans for modern stores.

Trenk spent $17,000 on his campaign which was considerably more then the few hundred dollars normally spent on elections for this position. He presented himself as someone who wanted to preserve the character of the town against unchecked development. McGuire felt that some development was necessary to keep the town going economically.

The election resulted in a tie vote. The Arizona constitution provides for a game of chance to break a tie vote. A fitting idea in a state where towns have names like: Show Low and Happy Jack. So the two candidates agreed to cut cards to see who drew the highest card as winner. Past choices have included rolling dice and even gun fights.

With Mayor Francia serving as MC the cards were shuffled by the town judge six times. McGuire stepped forward and pulled a six of hearts. Trenk, however pulled a king of hearts and was the winner. Within a few hours a crowd had gathered to watch the Council vote to change the general zoning plan that permit a Wal-Mart to be built. By a vote of six to one it was approved with Trenk casting the dissenting vote.

Scottsdale is in Maricopa County where one of the nation’s most controversial sheriff, Joe Arpaio, continues to create controversy. This headline grabbing law enforcement officer promotes himself as

"America’s Toughest Sheriff." Loved and re-elected by the conservatives for his harsh treatment of jail inmates, Sheriff Joe, as he is known, is embroiled in one more feud. He has dressed his inmates in pink with the old fashioned striped uniforms and housed them in tents even in the hot boiling Arizona summer months. Feeding them only twice a day on expired bologna sandwiches he put them to work on public works "chain gangs." As medical conditions and even death occurred among inmates over two thousand lawsuits were filed against the Sheriff in a three year period of time with over fifty million in claims. The county has paid more then forty million dollars in claims involving it’s sheriff.

His past actions have included culminating a long running feud with the Phoenix New Times by simply arresting the newspaper executives who were promptly released and the special prosecutor fired. The sheriff doesn't hesitate to use the power of his office when it comes to people he is fighting with.

He is currently being investigated by the FBI as a result of his policies regarding the arrest of illegal immigrants. In 2005 Arizona passed a law which authorized local law enforcement to deal with illegal immigrants and the sheriff began making arrests over the objection of federal authorities. The Sheriff said that he was not about to turn the arrested people over to federal authorities "…so they can have a free ride back to Mexico. I’ll give them a free ride to my jail." In the border state of Arizona where illegal immigration is a very hot topic the majority of people rallied to support the sheriff and others saw him as a dangerous loose cannon on deck who loves media attention.

Now the good sheriff is in the middle of it again. The county has a Board of Supervisors responsible for the dispensing of tax dollars. Arpaio has an ongoing feud with the Board over expenditure of funds and in particular with Board members Mary Rose Wilcox and Don Stapley.  He has launched a criminal

investigation into misstatements or omissions on financial disclosure forms by these two Board members. His office has sued the board during the last six months over financial issues. The dispute involves the fact the county has a $138 million dollar shortfall so the Board issued layoffs and made cuts. In addition, the Board imposed a freeze on all major purchases. In spite of the freeze, Sheriff Joe went ahead and bought a $450,000 motor coach to transport prisoners from jail to the court house which he added to a fleet of used school buses already in service. However, to register and license the vehicle requires approval from the Board so when the Sheriff’s office arrived to get this done, they were turned down. As a result the shinny new bus sits parked in a jail facility parking while the fighting goes on. So far, it’s a standoff. The Board says the sheriff violated the freeze, paid too much for the bus and doesn’t even need this kind of expensive rig simply to transport prisoners from jail to court. If he really needed a new bus, they say, why didn’t buy one like the ones he already has and which cost a fraction of what this one cost?

So Sheriff Joe continues to do it his way having fought off attempts to defeat him at the polls, lawsuits and even a recall effort. The county treasury, it would seem, has paid a heavy price for his heavy handed methods and controversial actions.

And the last bit of news involves the recall of Zicam, the cold remedy. The corporate office is here in Scottsdale and the paper reports that after the FDA abruptly ordered the recall of its products the company was defending itself in the media. It turns out that the company has settled some three hundred and forty lawsuits since 2006 for twelve million dollars involving claims of injury from its product. In addition, the company insists that its failure to tell the FDA about a collection of about eight hundred complaints it received was due to a misunderstanding. Even though the law requires advising the FDA of such complaints and they failed to do so, nevertheless the company says it was all a misunderstanding. They say they had collected the complaints in a file and were waiting for an onsite inspection by the FDA when they would have disclosed the complaints. They claim they made an honest mistake about the requirement to immediately notify the FDA of such complaints.

So there you have it. All the news from here in Lake Woebegone Scottsdale, Arizona

One thought on “THE NEWS FROM LAKE WOEBEGONE SCOTTSDALE, ARIZONA”