When I was a freshman in college in 1954, Dusty Rhodes became the hero of the 1954 World Series playing 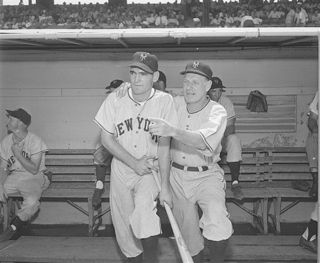 for the New York Giants.. In the first game, batting left handed, he hit a pinch hit home run in the bottom of the tenth inning off of pitcher Bob Lemon to win the game. It was a tie breaking three-run homer for a 5-2 victory. As he watched the ball go into the stands 290 feet away, Lemon threw his glove in frustration. In an interview Rhodes said with a laugh ‘Lemon’s glove went further then my home run."

Then, in the second game, he hit another pinch hit single in the fifth inning followed by a homer in the seventh that ensured victory. In the third game he had a two run single for a 3-0 lead in a six to three victory. For some reason manager Durocher decided not to use him at all in game four which the Giants won anyway. All told he batted six times and had four hits with two home runs in that series when the Giants swept the Cleveland Indians. The homers were off of pitchers Bob Lemon and Early Wynn who both ended up in the Hall of Fame. That year he hit .341 with fifteen homers in just eighty two games. He was never a regular in the Giant’s lineup for a full season so his career statistics don’t reflect his ability. He had a .253 batting average. Manager Leo Durocher picked his spots to send him in and in that series he earned the nickname "The Colossus of Rhodes."

Otherwise known as Dusty Rhodes he was one of the unique legends of baseball. James Lamar Rhodes was born in Alabama near Montgomery on May 13, 1927 and died June 17, 2009 in Henderson, Nevada at age 82. He grew up picking cotton and working in a grocery after quitting school in the eighth grade. As to the nickname Dusty, Stan Grosshandler has written an article "Where have those grand 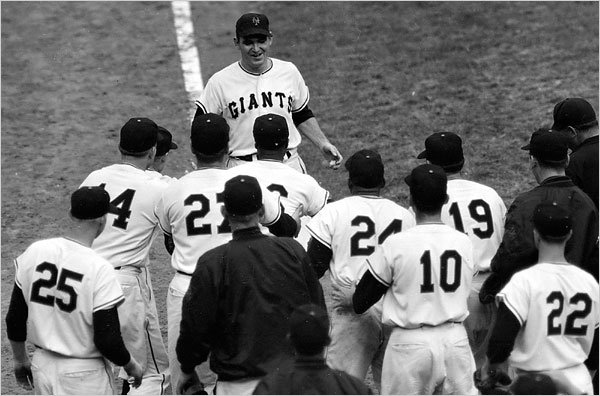 old nicknames gone" in which he describes the nicknames of yesterday’s baseball players. He says that at the time Rhodes played there were automatic nicknames. If your name was Rhodes, then you became Dusty and a large number of players had that nickname.

In December of 2008, Daily News sportswriter Bill Madden reported the last interview with Rhodes before his death. His article was titled "Dusty Rhodes, hero Giants’ 1954 series win, hits high notes." Sick with oxygen tubes in his nose and in a wheel chair, he told Madden: "It’s funny. I was never sick a day of my life until I quit drinking." Rhodes was a hard-drinking, fun loving country boy. When he was asked about Durocher not playing him in the fourth game of the World Series, he said: "It was just as well. After the third game I was drinking to everybody’s health so much that I about ruined mine."

After serving in the military in World War II Rhodes played minor league baseball for the Giants and played for the Tacoma Giants in the 1960's. He was called up to the majors in 1952. He and Durocher never got along very well. In his book Nice Guys Finish Last Durocher described him as the worst fielder who ever played in a big league game who made training rules forgotten. He wrote:

"Anytime you see a fielder get under a ball and pound his glove – even in Little League – you know he is going to catch it. I’ve seen Dusty Rhodes pound his glove and have the ball fall twenty feet behind him."

However, Durocher also said "A buffoon is a drunk on a hitting spree. Dusty was the kind of buffoon who kept a club confident and happy. And boy could he hit. Between him and Willy Mays there was nothing but laughter in our club house." Others have said he was a typical Durocher player, one who seemed to be unable to run, hit, throw or field but beat you anyway. Rhodes once said in an interview:

"I ain’t much of a fielder and I got a pretty lousy arm, but I sure love to whack that ball." 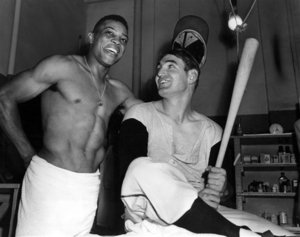 Team mates and friends said he had a thousand stories and could tell a story better then anyone. He used to insist Herb Score was the best pitcher he faced because he said he never saw the ball. He just heard it go by. Hall of Fame broadcaster Vin Scully said "just mentioning his name, I start to smile…I guess they needed a designated hitter up there and he’s not a bad one to have."

The African American players who were his team mates say that he was totally color blind when it came to race. Monte Irvin, Hall of Famer, said he was like a brother to all the black players. Willie Mays said when he learned of his death: "He was a fabulous hitter and a great hitter. He stayed at my house and I’ve never had a greater friend."

He played for the New York Giants from 1952 to 1957 and then appeared in fifty four games for the San Francisco Giants in 1959. After his career was over he worked for a friend on a tug boat for twenty five years. When he was asked why his career was so short, he said that after Durocher left the Giants baseball wasn’t fun anymore. Baseball wasn't the same after it lost Dusty Rhodes.