The year  I graduated from high school in Anacortes, Washington, my maternal grandmother Marija Babarovich died. Her story of immigration is one of great courage and sacrifice that I have described in writing about my mother. But, on the annversary of her death I want to reprint it again. I remember her vividly. A tall erect woman with hair piled high on her head, she looked regal. She spoke no English and 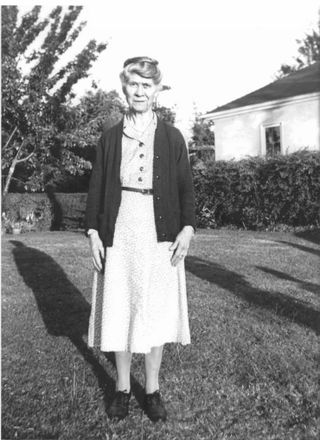 we children spoke no Croation so communication was largely through my mother and sign language. In spite of the communication barrier there was a great deal of non verbal communication. She was a religious woman who frequented the Catholic church. When I would say good by after a visit she always said in broken English "Be a good boy," advice I should have taken more to heart in my youth.

The story starts with, one of three brothers living in Austria-Hungry on an Island. She was married to Peter, one of the three. One of the brothers immigrated to the United States, and ended up in Anacortes. All three brothers were all from the village of Splitska on the island of Brac'. The family operated a vineyard and made wine and olive oil which they sold to support themselves. It was the oldest boy, John, who led the way to America. He was anxious to travel to America after he had served Austria-Hungary Navy for four years. Finally, in 1879 John’s father gave him the money for the ticket and John left home to go to America. At first he wrote home, but then nothing was heard from him for about ten years. One day a wine buyer came to the family farm and asked if they had a relative living in America because he had met someone with the same name in Seattle. John’s parents got the address and his brother Peter wrote his brother in America. A few months later John wrote back sending a ticket. Spiro’s oldest boy, Ernie, and John’s brother, Peter,(Nonno) my grandfather, traveled to America. The following year Spiro sent for his wife Jennie and his six children while Peter sent for (Nonna) my grandmother, Marija Mattia Vulic' Babarovich and their five children.

The two women and the children took an ocean liner in steerage to America and after clearing immigration continued by train across the United States. They finally ended the trip in Burlington,

Washington. My grandmother remembered that it was night time and they were cold. There was a station master on duty. While speaking no English she communicated by opening and closing the door to the pot bellied stove to indicate they would like to build a fire. He showed them where the kindling was kept and they made a fire. The children were thirsty and water was outside obtained by a pump and bucket. They spent the night inside station house waiting to be picked up. The next day my grandfather’s brother, John, arrived with team of horses and a wagon. All the trunks and the people were loaded aboard the wagon and pulled by horses they set off for Anacortes a bumpy rough twenty plus mile trip.

When they arrived at the logging and fishing town of Anacortes with its sawmills and canneries they found a main street that was an unpaved mud hole with pigs and chickens running loose. My grandmother was upset at having left a comfortable farm home only to end up here. She said to John, "Is this where we are going to live?" "No," he said, "we are going to Sinclair Island." They spent the night in Anacortes and the next morning everyone was loaded with their trunks on the boat which delivered mail to the Islands. They finally arrived at the homestead the brothers had started on Sinclair. After settling in for a few days, Nonna asked "Where’s the school?" She was told they had none. "So, where’s the church?" she asked. There is no church she found out. Nonna was unhappy about no school and no church. Feeling the pressure John donated two acres of land for a school house and a school teacher was hired to teach the children. The family settled in to homesteading their farm in this primitive setting.

Nonna was pregnant with a child and my mother’s brother, John Babarovich, was born on the island in 1903. He arrived unexpectedly while people were away. My grandfather was the only one there to help with the delivery. My grandmother cut the cord and soon was busy taking care of the whole family where everything was done by hard labor. Then, in 1904 my grandparents decided to move to

Anacortes. Having no boat large enough for their belongings and the family, Nonno borrowed a scow from Ernest Kasch. Nonna made a sail out of an old sheet and he mounted it on a mast, created a rudder and loaded it with their belongings and the whole family. He was an excellent seaman and waited for the right tide before shoving off for the trip. They traveled around Cypress and Guemes Islands and right into the docks at Anacortes. They found a rental house and moved in. Mother was born in Anacortes, the youngest of eight children, and attended grade school for a time before having to quit and help with the family. My grandfather, Peter, was born in 1861 and died in 1935 shortly after my birth. My grandmother was born in 1863 and died in 1953 at age ninety years.

A year later nonno’s brother Spiro (born 1863 & died 1926) and his family followed them to Anacortes. The remaining brother, John, stayed on the Island. He was a commercial salmon fisherman. His boat, Uncle John, was the first fishing boat in the area to use a purse seine net and one where the crew slept on board. Other fisherman had camps on shore where they spent the night. John was an extraordinary man who died in 1916. He was well known and very respected in his community. In fact, his monument at the Anacortes cemetery reads "Known among men as honest John."

So this is written in the memory of my grandmother. May God rest her soul in peace.