On August 7, 1919 the local Anacortes newspaper reported that William Jennings Bryan had stayed in Anacortes where he gave a lecture in a big tent. He was entertained by Will A. Lowman and his wife who drove him to Mount Vernon where he gave another lecturer. Lowman was a local well known Anacortes figure. He was an Anacortes pioneer. When the Bank of Anacortes failed his business, 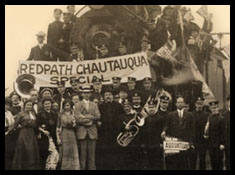 Lowman Manufacturing Company went into receivership and he turned to fishing for a new start. He established fish traps for salmon and built a fish cannery to process the salmon. His business prospered and he expanded the operation to Canada as well as investing in mining. He built a large home and became active in politics. He was elected to the state legislature.

Bryan was the three time nominee of the Democratic party for president of the United States. He was the Secretary of State under President Woodrow Wilson and was well known for his prosecution of the young school teacher in what became known as the Scopes trial. Scopes was defended by Clarence Darrow. Bryan was one of the most popular speakers in American history of the time and a famous American figure. So what was he doing

in Anacortes? He was a traveling lecturer on the Chautauqua speaking circuit.

The Chautauqua was a non profit adult education and summer resort center located in Chautauqua, New York – the extreme Western part of the state. It was organized in 1874 by a Methodist minister. The idea of entertainment, lecturers and music expanded and spread across America as a form of education and entertainment through the 19th and 20th centuries. Speakers, musicians, teachers and others would travel and speak to crowds in rural America often in a large tent erected for the purpose.

In Washington state, the route involved such towns as Sedro Woolley, Monroe, Waterville and even Chelan. There were traveling bands playing John Phillips Sousa, people like Bryan preaching about the benefits of prohibition, religious speakers and every form of entertainment that made it so popular with rural Americans. The Chautauqua was an American instutition that brought the famous and not so famous to the people of America. The Chautauqua exists to this day as an ongoing institution. For information see: . http://www.ciweb.org/