In 1934 the first Master tournament was held. It was so new it wasn’t even called the Masters. Two co-founders, Clifford Roberts and Bobby Jones, disagreed on the name and it ended up being called the "Augusta National Invitation Tournament." It was played under that name through 1938 and the next year became known as "The Masters." 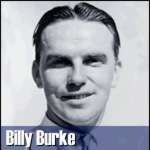 In 1934 Horton Smith won the tournament. He was nicknamed "the Missouri Rover" and he beat Craig Wood by only one stroke at four under two hundred eight two for the $5000 prize. Smith was considered a great putter and his twenty foot birdie on the seventeenth hole in the final round made the winning margin. Smith went on to finish second the next year and win the 1936 Masters. Wood finished second again in 1935. By the way, Bobby Jones only tied for thirteenth which was his best showing in the twelve Master’s he played in.

William John Burke was born in 1902 and was a well known American golfer in the 1930's. He won the 1931 U.S. Open after a marathon playoff with George Von Elm who were tied at eight over par after regular play. The following day they played a thirty six hole playoff and tied again! The following day they played thirty six more holes and Burke won one forty eight to one forty nine. That was the most holes played to determine a champion.

But, it was the 1934 Masters that was a heart breaker for Billy Burke. In 1934 Burke’s putts on the sixteenth, seventeenth and eighteenth greens rolled right to the edge of the cup and just hung on the edge without dropping. The crowd yelled for him to wait to see if the wind might blow them in, but they didn’t drop. Each time he was forced to tap the ball in. If just two of those putts had dropped in he would have been the winner.