You’ve probably read or heard about the "cathedral of Junk" in Austin, Texas. I happened to be listening 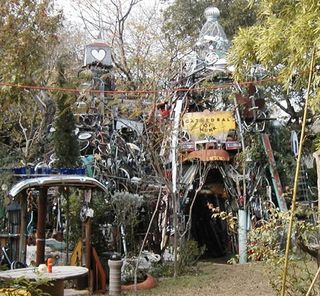 to public radio http://www.npr.org/ when an interview with the creator, Vince Hannemann, age 47, was broadcast. I hadn’t heard about it before the broadcast, but it was unusual enough I thought I’d check the internet about it. In an article in Roadside America http://www.roadsideamerica.com/story/7816 it says that this arrangement of junk is in Hannermann’s back yard and was constructed over time using cast away junk. He started it in 1988 and has added to it until, by his estimate, there are 60 tons of junk involved.

The materials are things like lawnmower wheels, car bumpers, cables, circuit boards and the like which extend up into the air. Much of it is material which people have dropped off and left in his driveway. You can walk inside and there are a maze of ways to explore. He had to remove his "pyramid of tv’s," some 200 in all to make room for expansion. There have been weddings, CD debut parties and bachelor parties held there. People visit and even tour groups stop by. They walk up his driveway into his back yard and explore, unsupervised. Now a complaint has been made and the city has sent him a notice to get rid of his work of art. Hannermann is appealing to the public to save it. He has volunteers helping him remove a third floor access to the public and to obtain permits as well as remove electrical wiring from the structure. Whether his work of art will survive is uncertain, but he has already received a request to build another one near a dump site. So, if you are in Austin and want to see an unusual idea of art, stop by Hannemann’s house. It’s free.