It dealt with the ill-advised political decision of the Republican Attorney General Rob McKenna to join a lawsuit to block the comprehensive health care bill passed by the House. The governor responded to his attempt to try to sabotage the law by saying:

"I completely disagree with the Attorney General's decision and he does not represent me," the governor said. "This is landmark legislation that will cover over 32 million Americans who don't have health care. I have made it clear to the Attorney General that I will actively oppose this lawsuit if it moves forward."

Representative Jay Inslee really drove home how irresponsible this purely political decision is when he said:

"We fought over 2,000 insurance industry lobbyists in Washington DC to protect Washingtonians health care, we shouldn't have to fight our own Attorney General too," Inslee said late Monday night. "Stripping families of their legal rights to insurance, may be the South Carolina way, may be the insurance company way, may be the Tea Party way, but it's not the Washington way."

My question is under what authority does McKenna join in such a lawsuit? Who authorized it? Certainly 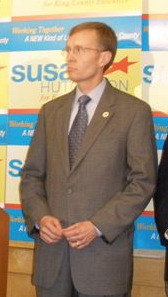 not the legislature. Certainly not the governor nor the courts, so under the division of power of our state government how can the Attorney General initiate action as his personal Republican political decision? Section Twenty One of the state Constitution says:

"The attorney general shall be the legal advisor of state officers and shall perform such other duties as maybe prescribed by law."

It doesn’t sound to me as if he has the power to bring lawsuits in the name of the state on an issue of this kind without authorization from the executive branch since he is a legal advisor of state officers or without authorization from the legislative or judicial branches of state government.  But, even if he does have that power, he has abused it by this arbitrary effort for headline publicity and political gain.

This state’s two senators are Democrats. Six of the nine members of the House are Democrats. The governor is a Democrat, so where why does he think it's OK to make an individual decision to sue on behalf of the state. It’s tiresome to always have personal politics direct the actions of elected officials. It is tiresome when they think only of getting elected instead of representing the people. This attorney general needs to be replaced for exceeding his position for his own personal political gain.