I hadn't head of Desmond Doss (1919 – 2006)- http://en.wikipedia.org/wiki/Desmond_Doss - who was the first conscientious objector to receive the Congressional Medal of Honor until I came across a note about him. He was one of only three who was so honored. He was a Private first class at the time of his actions. As a Seventh Day Adventist Doss refused 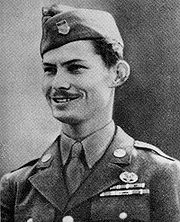 to carry a weapon into combat and served in the Pacific theater of World War II as a medic. He received the medal of honor because of the risks he took to himself while saving the lives of dozens of fellow soldiers. An award-winning documentary was made about him, The Conscientious Objector.

At first the men made fun of him for his praying, refusal to drill on Saturday’s, carry a rifle and his religious beliefs. However, in time, they began to admire his faith and determination.

His actions occurred in the Pacific at Leyte and Okinawa. The citation he received said that in the battle, enemy fire caused seventy five casualties. Doss refused to seek cover and remain in the area with many of the injured carrying them one by one to the edge and then lowering them on a rope litter down the face of the cliff. On another occasion he rescued a wounded man, who was some 200 yards ahead of the lines. This was done in the face of heavy fire and mortar fire. Two days later he treated four men who had been hit while assaulting a defended cave. He advanced through a shower of grenades and gun fire to within 8 yards of the cave mouth where he dressed his comrades wounds. He made four separate trips under fire to evacuate them to safety. Three days later he advanced under enemy shelling and small arms fire to assist an officer who had been wounded. He applied bandages and moved him to a place of protection while under fire where he

administered plasma. Later that same day he crawled under enemy fire to within 25 feet of the enemy position to administer first aid and carried the wounded some 100 yards back to safety while continually under enemy fire. On another occasion, during a night attack, he remained in the exposed territory while the rest of the company had taken cover. He gave aid to the injured until he himself was seriously injured by an explosion of a grenade. Rather than call for aid, he cared for his own injuries and waited five hours before litter bearers could reach him. As they headed back under enemy fire Doss saw a more critically wounded man nearby. He crawled off the litter and directed the bearers to get attention to the other man. While waiting for the litter bearers to return, he was again wounded when struck by a sniper bullet. This time he suffered a compound fracture of his arm. He bound a rifle stock to the shattered arm as a splint and crawled 300 yards over rough terrain to the aid station. For his outstanding bravery and unflinching determination in the face of desperately dangerous conditions, he saved the lives of many soldiers. His name became a symbol throughout the 77th infantry division for outstanding gallantry far above and beyond the call of duty.

Doss also received the Bronze Star for his actions. By coincidence, he died on the same day another Medal of Honor recipient died, David Bleak. One has to admire the faith, determination and bravery of people like Desmond Doss.

2 thoughts on “DESMOND T. DOSS, A CONSCIENTIOUS OBJECTOR WHO WON THE CONGRESSIONAL MEDAL OF HONOR”