When I was a child growing up in Anacortes, Washington, there were two movie theaters in town. One, the Empire Theater, at 7th & Commerical Avenue, was directly across from our family’s grocery store. The building is there, but the theater hasn't operated in many years. Today, Burton Jewelers occupies the area which was the lobby and ticket office. Since I was too young to work at the store they would take me with the family to our family grocery store, but, I got to go to the Saturday matinee movies while everyone worked. I have clear memories of mother taking the time to get a loaf of fresh bread, some sliced meat from the butcher department and make me sandwiches with fresh tomatoes and lettuce which I ate on a vegetable crate turned on end as my  table. After my lunch I would be given enough money for the movie and some popcorn. 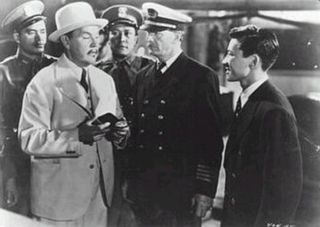 the theater. Charlie, who ran the small stand sold candy, popcorn and theater treats. He was a very nice man who was crippled in a way I don’t recall. The popcorn came in different sizes and would be put in a brown paper sack with butter and salt on it. You took it with you into the theater. On Saturday afternoon the place was filled with kids because the movies were double features – two movies – plus you got to watch a news reel and a cartoon plus features of coming events.  You got a lot for your quarter then. The movies were western’s or the black and white B movies of that time. In addition to the movies there was a "short" – a serial, usually a western serial, that played each Saturday. Like a soap opera on television today, these movies were short segments of a story that you watched each Saturday and would be continued until the next eposide the next Saturday. Usually they were westerns. Most of the movies were westerns as well. Roy Rogers, Gene Autry and William Boyd as Hopalong Cassidy were in almost all the movies. Gene had Smiley Burnette and Roy Rogers had Andy Devine & "Gabby" as side kicks. We liked the westerns except when the hero played his guitar and sang or kissed a girl.

One of the movies that would be shown on Saturday's as the second part of the double feature was Charlie Chan movies. I doubt anyone today even knows who Charlie Chan was, but back then the kids thought he was brilliant because he solved mysteries the police and other people couldn’t figure out. Sidney Toler was the actor who played Charlie Chan in eleven films for 20thCentury Fox and then went on to play him in eleven more films for Monogram Pictures. Charlie’s assistant was his son played by actor Benson Fong. Playing Charlie’s "number two son" was actor Victor Sen Young who was the impulsive son who had to be held back from making mistakes in solving the crime. Actor Mantan Moreland played side kick and assisted Charlie in some films. The plot was always the same format. It involved a crime with a number of suspicious people any one of whom could be guilty. But, Charlie, would stage some brilliant trap to catch the guilty one who would end up confessing. Charlie would be very politically incorrect today as he talked in stereotyped Chinese pidgin words. But, Charlie was very wise. Here are a few of his wise observations from his films: http://www.reellifewisdom.com/the_top_10_wise_quotes_from_charlie_chan

"Waiting for tomorrow waste of today." Charlie Chan in Egypt (1935)

"Journey of life like feather in stream – must go with current."Charlie Chan in Egypt (1935)

"One grain of luck sometimes worth more than whole rice field of wisdom."Charlie Chan at the Circus (1936)

When Toler learned that Fox intended to phase out it’s B picture unit, he bought the rights to the character from the widow of Earl Derr Biggers who had created Charlie Chan. Biggers, it turns out, fashioned Charlie after a real life dectective in Honolulu named Chang Apana. He offered a package deal to Monogram that made inexpensive movies for second rank theaters. These movies were done in only a few days.

What brings all this mind to me today, is that the Sunday New York Times this week, has an article about  Charlie Chan movies and the fact that Fox films of Charlie Chan have just been issued on DVD. I think I’ll buy them just for old times sake and remember when I spent wonderful Saturday afternoons at the movies.

0 thoughts on “CHARLIE CHAN & THE SATURDAY MANTINEE IN ANACORTES”