Johann Hari wrote a compelling post on work conditions in China earlier this month. http://www.huffingtonpost.com/johann-hari/and-the-most-inspiring-go_b_672993.html. His report includes such facts as the estimate that as many as 600,000 people are killed as a result of their work or work conditions in China each year. He describes the typical working situation as giant factory-cities from which the people rarely leave. Work hours average from 7:45 am to 11:00 pm. They are required to buy from the company canteen. At the same time, he reports, their wages have gone down rather then up. Suicides among workers were becoming common. Now, Hari says, wildcats unions have sprung up by being 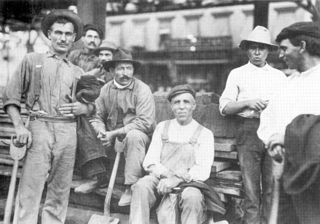 organized through text messages. Demands for higher wages and humane work environment are having an effect. Millions of younger workers have blockaded their factories. Chinese dictatorship was forced to draft a new labor law allowing workers to create trade unions. Hari reports that company after company has been forced to make huge concessions including pay increases. It would appear the Chinese worker may be given more and more benefits as well as relief from horrible working conditions.

I don’t know if a comparison can be made, but it seems to me this cycle of worker exploitation evolving into worker rights is not unlike other countries, including the United states.

In the late 1800's workers in factories like the Pullman Company, lived in factory cities and bought at the factor store. George Pullman ran his workers like a prison farm. One employee said:

My fraternal grandfather and my father were part of the wave of Italian immigrants who came to the new world for a better life. Some five million Italians immigrated to the U.S. with the greatest number from 1880 to 1914. About two thirds of America’s Italian immigrants arrived from about 1900 to 1924. Some eighty per cent were from Southern Italy. That’s were my grandfather and father lived, at the tip of Italy. They came to the "new world" around 1912 to work, first on the railroad and then in the coal mines.

It was a time of labor unrest and struggle. The IWW union and other groups struggle for labor rights resulted in Attorney General Palmer ordering raids on union meetings and arresting members. Immigrants were illegally deported without any due process of law. Strikes were common and all strikers were claimed to be communists. Then the Emergency Quota Act of 1921 was passed to limit immigration from foreign countries.

It was during this general time Italians Sacco and Vanzetti were two Italian immigrants who promoted anarchism. They were wrongly convicted of robbery and murder. They were executed in 1927. 1925 was also the time of the Scopes trial in Tennessee where a school teacher was convicted of the crime of teaching evolution instead of creation from the Bible. This period to World War I was that of labor unrest with violent struggles between factory owners and workers. While conditions changed for the better after the first World War, the depression quickly brought the end to labor demands. World War II brought a new period of worker prosperity for those who did not serve in the military.

Our own history and that of other countries has resembled China's. Let's hope China's laboring class can achieve the changes we were able to make.