St. Mary’s Catholic church is celebrating its 100th year anniversary this year. I was baptized in the original church building located at the corner of 7th& N Avenue in Anacortes and served Mass as an altar boy when growing up. In fact, when the original church building was closed and the church moved to a new structure, I bought two stained glass windows from the closed church building. One is installed in our Gig Harbor home with a back light and the other is located at our Mount Rainer cabin. Both are very old and give a great deal of pleasure to look at and reflect on 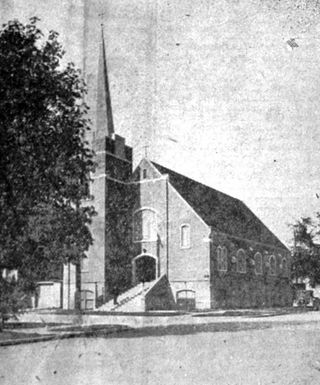 The first Mass in Anacortes was in the home of Mrs. Adelaide Davis Kasch by a priest who came from La Conner for the service. It was Mrs. Kasch who spearheaded the drive for a church in Anacortes. Bishop Edward J. O’Dea dedicated the first wooden church and it officially became a parish in February of 1910.

Amos Bowman had founded Anacortes thirty three years before St Mary’s was dedicated as an official church. Before that Anacortes was served by priests from La Conner, Snohomish and Sedro Woolley as a mission.

The first pastor was a very unique man and priest. Fr. Gustave Truenet was the  first resident priest in Anacortes. Born in France, he had attended the Sorbonne and obtained degrees in both law and medicine. In spite of those degrees, he decided to become a priest. He had served in Nova Scotia and came to Anacortes from there. Arriving in 1910, he first constructed a church basement called Joan of Arc Hall which was finished in 1920. The rest of the upper church structure was completed in 1929. The church was one hundred feet long by forty feet wide. It was made of lumber with outside stucco. The basement cost $10,000 to construct and the upper church $22,000 at the time of original construction. That was the parish church until a new church was constructed 1978 at a new location and the old church sold. The old church now serves as a Croatian Club.

For thirty eight years Fr. Truenet as the pastor and served until he died of cancer in 1948. Countless people were baptized, married and buried by him during that time. He was such a fixture in Anacortes that his mural has been painted on one of the down town buildings. Like an old country doctor who made house calls, Fr. Truenet promoted ecumenism before it became popular. He was a favorite of virtually everyone with his friendly demeanor and his open minded attitudes. He was a member of the local Rotary Club. The club was formed in 1922 and dad joined the club in 1929. He was a lifelong member. Everyone knew him and he was very active in the community. He was a man of strong opinions and not afraid to express them.

I have very vivid memories of Fr. Truenet as a youngster. I can remember serving Mass for him and sitting in church on Sunday looking at all the stained glass windows that told a story. I remember riding with him and other altar boys on a trip to St Edward Seminary in Kenmore as a reward for our service. He would tell stories about his life and entertain us plus share candy with us as well.

I have very fond memories of the original Catholic church. The basement served as a social center and for the parish activities. Cooking was done in the kitchen. The Croatians were a central part of the parish and their food was wonderful. The old church as the central part of parish life when I was growing up. It remains a fixture in my mind today. Happy Birthday…