The  Ile de Re is a small island off of the city of La Rochelle southeast of Paris. It is 14 miles long and only 4 miles wide. It is nearly flat. Our hotel is in St Martin, the island’s capital, and is a fishing port with white washed houses and a protected harbor. Fifteen minutes away is La Flotte which is regarded as one of the most beautiful villages in France. It, too, is a small port and fishing village. Here there are 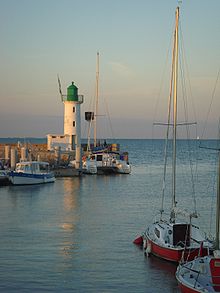 twisting narrow roads and alleyways with small shops. Both villages have markets. St Martin’s is inside and has large displays of freshly caught fish, vegetables and every other kind of thing essential to village life. La Flotte has a large outdoor market which is bigger then St Martin’s and carries many things for sale. There are more shops and interesting things to see here. La Flotte’s market is the oldest market on the island.

In early March of this year the lovely town of La Flotte along with the entire Atlantic coast of France was hit with a wall of ocean water that over ran the crumbling sea walls along the coast ands flooded this town. It’s unknown if this freak event was due to climate change, a hurricane or a combination of very high tides with wind. Some fifty two people were killed when the storm hit around 4:00 am. Houses were ruined, herds of cows drowned, fields destroyed with salt water and flooding everywhere. This flat island was hit very hard when the town’s sea walls crumbled with sea water flooding in ripping up trees and coating the island with mud and debris, in some cases up to roof tops. France has some 6,000 miles of sea walls, but some were built in the 18th century. The Netherlands dike system is under constant monitoring and maintenance since two thirds of the 16 million people live below sea level. France, however, failed to maintain their sea defenses. When the winds of 100 miles hit the French coast with the high tides there was a fatal combination.

We enjoyed our trip to La Flotte and the market. We had a delightful lunch at a café along the harbor that had photos of the water that had filled the lower level of the building it was located in. Lita bought spices and herbs at the market which I will have to seal in something because they have such a pungent smell the drug sniffing dogs at the airport will be alerted.

We have walked St Martin’s several times and are going to visit to La Rochelle to see what it is like. La Rocherlle was the site of years of religious struggle and war between Catholic and Protestants. It  has a long history of war and struggle for control. It was also the site of a submarine base at the main port of La Rochelle during the second world war. In fact, the movie Das Boot used the area for filming. It was a German stronghold and one of the last French cities to be freed.  The town and the Island we are staying at were hold by some 20,000 German troops during the war.

Today we took the thirty minute drive to La Rochelle and walked through town and up the hill along the main shopping street to the area where Lita wanted to check on some silverware. We decided to have coffee first and rest. When we were through we discovered all the shops had closed because it was 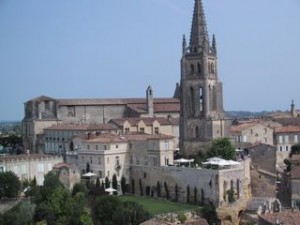 just past their 12:30 closing time. Very frustrating custom when you aren’t used to it. She was never able to go in the shop as we needed to be back in St Martin before the shops re-opened.

Lita walked around and I headed back to the restaurant we planned to eat at. I bought the International Herald and sat on a bench reading it while I waited. A parade of people, most with every breed of dog on leash, went by while I waited.

Our lunch was delicious. Fresh fish and a desert to die for. That alone was worth the trip to town.

Tomorrow we leave in the morning for Saint Emilion, a small town located about 22 miles northeast of Bordeaux. Saint Emilion is one of the principal wine areas of Bordeaux. The primary grapes are Merlot and Cabernet Franc and less amounts of Cabernet Sauvignon. It is one of the four Bordeaux red wine regions. The Romans planted vineyards here as early as the 2nd century and the town dates from the 8th century when a monk, Emilian, settled in a cave carved into rock.

The town has a large square with a church on one side that has been, in part, carved out of rock. There is a monastery, a 13th century bell tower and an underground pottery museum built in the 12th century. Of particular interest is an underground catacombs that is extensive and can be seen by guided tour. Our destination is the four star Hostellerie de Plaisance located at the top of the hill town. It has a view over the area below and has a two Michelin star restaurant. I’ll give you a report about this hotel and the towbn when we have had a chance to experience it. Tonight we eat in our hotel whose tiny restaurant is excellent.