It is a three hour drive from Saint Martin to Saint Emilion. Most of it on an autobahn like freeway. The entire drive was through farm and unimproved land. As we got off the freeway and closer to our destination many large and small vineyards began to appear. Some very beautiful chateaus were  seen more often. The road became narrow. A two lane asphalt road without shoulders until we finally arrived at tiny Saint Emilion. We said good by to Sybil, our driver who found her way here through

multiple round-about and with poor signs. She is an attractive, slight slip of a young woman who looks thirteen, but is probably over twenty five. She speaks excellent English because she spent a year in Arkansas as an exchange college student. She has a degree in language and has applied for a job in St. Louis teaching French because she married a young man from there (who doesn’t speak French) In fact, she was looking forward to driving back the day she drove us because her husband was coming in on the train from Paris. They married four months ago and he had to return to the U.S. and they have been separated for several months. They have been communicating by computer camera. They hope to work together at Ski resort this winter before returning to the U.S.

We are in the center of the red wine country.  There is a very large church on one corner of a large square and buildings around the square. It is the largest monolithic church in Europe with extensive underground galleries. There are several cafe’s around the square with out door tables and people eating lunch with their wine. We are on the top of a hill looking down on rolling vineyards below. The little hotel is next to the church and our room is a jewel. The door opens to the outside where there is a green grass lawn and two large cows grazing on the grass,. Below there is a view of the valley. There are no other rooms at this location so the garden lawn is our private pleasure.

The cows? Oh, they are full size but made of a ceramic material and painted only as the French would paint them. One is brown checkered painted and the other has different scenes painted on it. Actually, they are kind of interesting and fun to look at as they stand grazing on our lawn outside our door.

There is an underground pottery museum located in a former quarry that was used in building the town. Other underground monuments include a hermitage, catacombs, chapel of the Trinity and the church. We have yet to explore any of these.

We had a wonderful lunch outside with excellent wine and took a quick trip around the very small town with small shops. The great majority of these are selling wine. One small, narrow street goes down at a sharp fifty degree angle with small shops. The roads are all stone cut to size and fitted together. A ride on a bike or a horse drawn carriage would really be bumpy. I walked to  an 18th century former convent close by. The roof has long ago fallen in, but the walls are intact as are the ornate posts in what was the interior garden. The stone here is limestone and the convent was constructed out of it. I sat in the court yard thinking about young women entering this imposing structure with high walls and who were to remain behind these walls praying and meditating, cut off from family and friends. I wondered how many of them over the many years had sat on this same stone bench reading, praying or meditating. There were two chestnut trees and the were lovely brown chestnuts laying on the ground. I picked up several and rubbed them shinny to take home to remind me of this place.

Last night, Friday, we were in the small bar at our hotel which brings up Sumner Redstone.  He is a media giant with Vioacom Inc, CBS television network, cable channels and Paramount studios to name 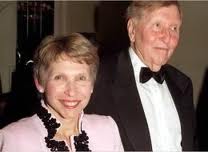 a few. He is worth $8 billion dollars according to Forbes Magazine. He is 87 years old and has a brother Edward age 79 who is worth an estimated $6 billion. Both are tough business people who made their money the hard way. Sons of a small time drive in theater mongol, Sumner was trained as a lawyer who has a reputation for lawsuits. He has been involved in a lawsuit with his daughter who is 57 years old over control and interest in the family fortune. Once in line to take over, they now only speak through their lawyers. Eight  years ago Sumner divorced his wife of fifty two years and married a woman forty years younger.  He is a very high profile and wealthy individual. He also has a very recognizable face (see photo insert) and last night he his wife were with some others sitting ten feet away. I only had an awareness I recognized the face, but Lita made the connection. So, there is some more celebrate reporting,

We ate in the wonderful restaurant, but before dinner, while seated in the small bar, we first had a man bring us the menu. It offered to fixed dinners. One less elaborate then the other. The more extensive one was labeled a “mystery” because it was the chef’s selection and was not outlined. Next the chef came through and introduced himself. He looks like a former wrestler and, in fact, was a long time Rugby player. Broad shouldered, bald and very strong looking. The dining room is a large high ceiling room very beautiful. The meal was many courses  long, but each course was small. There was a different wine for different food. Three white and four red. Each small course was a creation and all of the accompanying wines outstanding. It was an adventure and a banquet that was unique. We had entirely too much to drink and a great deal of wonderful food to experience. Unfortunately, near the end of the meal, I tipped a glass of half filled red wine over which found Lita and bathed her black outfit. This did not improve the meal as she had to endure the rest of the courses while wet, but with a most excellent wine.

This morning I feel the wine and the meal. Getting up was difficult. We are going to plan our day which may include a visit to a winery. I’ll give you an update later.