Dennis Hevesi has written an obituary for Manfred Gans http://www.nytimes.com/2010/09/19/world/europe/19gans.html that reads like a wonderful short story that could be made into a movie. Gans was a child, living with his parents in Borken, Germany. He had been born there April 27, 1922. His father was a well to do merchant in town and the first Jew to serve on the city council. As life for Jews became more and more difficult under Hitler his parents sent him to England when he was sixteen years old while they remained.

When war began, Gans enlisted in the the U.S. Army. Because of his ability to speak German he was assigned to a secret commando unit. He was part of the assault Normandy’s "Gold Beach" at H-Hour on 6 June 1944. He 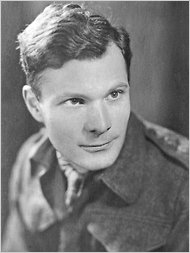 was assigned to interrogate enemy prisoners as the allies advanced across France, the Netherlands and finally into Germany itself. In March of 1944 he was part of the army that liberated his own home town of Borken. He found their family home and discovered it had been used as Nazi head quarters. The wine cellar had been used for torture. His parents Moritz and Else Fraenkel Gans had been deported to a concentration camp, but he didn't know which one. Gans figured that in all probability they had been taken to the camp at Theresienstadt because it was a German "show camp" for propaganda film purposes since his father had been prominent in the town. However, the camp was one where thousands of prisoners were taken from there on to another camp where there were gas chambers. For those that remained, many thousands starved to death in the camp.

On 7 May 1945, before Nazi unconditional surrender was known to all German troops, Gans received permission to look for his parents. He was determined to find them. His superiors allowed him to take a jeep and driver to find out what he could. They drove off towards Theresienstadt about 150 miles away. But, much of the area was still German held territory. Steven Karras has written a book The Enemy I knew: German Jews in the Allied Military during World War II. This collection of twenty seven personal interviews involved people relating stories, often some fifty years after World War II. It includes the story of Gans search for his parents. Karras has written that

It was early May in 1945 when they crossed over the Sudeten Mountains into Czechoslovakia to the barbed wire fences of the concentration camp. Karras has written that there were German divisions along the way that could have killed them, but when the arrived at the camp they found the Russians had taken the camp. 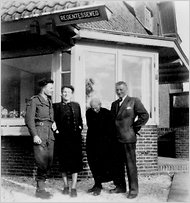 The Russian guard allowed him entry against orders because the area was under quarantine due to rampant disease. Gans made his way to the camp registrar, a young Dutch woman, and the two searched the lengthy records for the names of his parents. Gans remembered that she looked up and said: "You’re lucky, they are still here. They are alive."

The young Dutch girl went to the camp area where the parents were to prepare them. She found them. She said:

"I have a very joyous message for you." One of the two looked up, "Are we getting some extra food?" The Dutch clerk then responded, "No. Your son is here."

She brought Gans to them and he remembers his parents stepping outside. He says:

"My father was so decimated, if I had met him on the street, I would not have recognized him. When they saw me, my parents were totally swept up  – crying and in shock."

A crowd gathered and started singing. Some girls gave his mother flowers.

After the war, Gans returned to England and his parents settled in Israel. Gans obtained a degree in Chemical engineering. From there he immigrated to America. His father Moritz died in 1980 and his mother died  two years later. Gans's wife of forty three years died in 1991 and Gans himself died at age 88 last Sunday.

I was very moved in reading about Manfred Gans and his story. There are so many life stories that we only learn about after someone dies. This is someone else I wish I had known and could have talked to about this incredible experience.