W are in Paris. We flew from Seattle on Thursday mid day and nine hours later we landed in Paris at 9:00 am Friday. We arrived on an overcast day. The drive to the hotel, which should have been no more then forty five minutes long took  us almost two hours due to rush hour stop and go congestion.  When we finally arrived the room wasn't ready so we walked around and then had coffee. After that we had a very nice lunch and went back to the hotel. After an hour of waiting our room was ready. 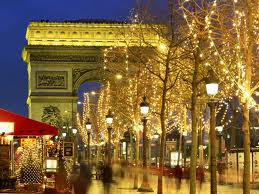 the beautiful and elegant Le Meurice on rue Rivoli. The view out our 2nd floor room is of the Eiffel Tower, the gold dome of the hotel des Invaldes and the twin towers of a cathedral yet unidentified by us. At night the Eiffel tower is lighted and very beautiful. The hotel is very old but very old world elegant and grand. The lobby has a large framed white rectangle box on one wall. Close examination reveals it is all soft ice. People write and draw on it with their finger. It is soft and marks easily. Each morning the ice is clean again. I have no idea what prompted this.

On Friday night we ate dinner at the hotel. Except for the outrageous price of single malt scotch the meal was very good and the hotel has a five star restaurant. With jet lag we were in bed early and awake in the middle of the night because our brains said it was daylight at home.

Saturday morning was hard to wake up to as our brains thought it was the middle of the night. We had a light breakfast in the room and then walked a mile to the Musee d' Orsay. It features art from 1848 to 1914. It is a converted railway station built in 1900 for the Paris Exposition it was used as a railway station until 1939 when it closed and sat unused until the 1970's when it was going to be torn down. Instead it was converted into this wonderful museum. Paintings of Van Gogh, Monet and Degas works of art just to name a few. In spite of the Saturday crowds it was a very delightful morning.

On our walk there, a young woman tried the gold ring scam on us. This well known scam involves the con artist pretending to suddenly find an expensive looking gold ring on the ground right by you. They then go through a routine of saying there is no place to turn it in, they don't want it, they just would like a small reward and give it to you. They try to get as much as they can from you.  The ring, of course, turns out to be brass covered junk worth pennies. In our case, I was irritated and told her to get lost.

We went to a popular shopping street and checked things out in the fancy stores. Prices were such New York seemed like a bargain. We looked at a lot and bought nothing. Lunch was at the Le Grand Colbert. The food was ordinary and the setting fun. This place was featured at the end of movie Something has to Give with Jack Nicholson and Diane Keaton. Getting there was a challenge of survival. The German speaking taxi cab driver didn't know the location and drove at race track speeds down narrow streets searching. One parked car door opened or pedestrian stepping out and it would be tragic. We did find the place without an accident, but I don't want to repeat the experience.

Saturday night we ate at the George 5th hotel dining room, my favorite in Europe for its elegance and wonderful food as well as attentive service. The lobby of this hotel always has the most unique flower display I've seen. Tall vases – five feet high with long stem beautiful flowers inserted at an angle is an amazing presentation. The multiple course dinner is accompanied by different wines with each course. The dishes are small and always creative. The room is a wonder as well with huge chandeliers and an appearance of being in a palace. The entire evening is always memorable. Our taxi driver on the way home was a friendly Frenchman with a sense of humor who has us laughing as we tried to communicate with a mix of bad English and mangled French. At one point he said "My English is almost as bad as your French" which made us all laugh because it was true.

Sunday morning is a beautiful morning with the sun out and the trees across  the street showing all ther Fall colors with the gold church dome out our hotel room window shinning in the sun. Tonight we have our first meeting of the group who is conducting the seminar we are here to attend. My talk is in the morning. Today is our day off and then we start being obligated.

I need to report our experiment at traveling with only a carry on each and checking no bags was a failure. My bag exceeded Air France's weight  maximum by seven pounds. We ended up checking both of the bags. That probably was a good thing as the plane used a long step ramp to de-board and then on buses to the terminal. Packing the bag down steps would have been a problem.

0 thoughts on “GREETINGS FROM THE CITY OF LIGHTS”