Both of my parents were of immigrant families in America. Neither had more then a modest grade school education. Dad lied about his age, left school and went to work at 15 years old in the coal mines of Coleman, Alberta for the International Coal and Coke Ltd company. Each miner was given a metal number they wore around their neck to identify them in case of injury or death and to indicate whether they were in the mine or out. You put it on when you started your shift and hung it on an "out" board when you ended your shift. 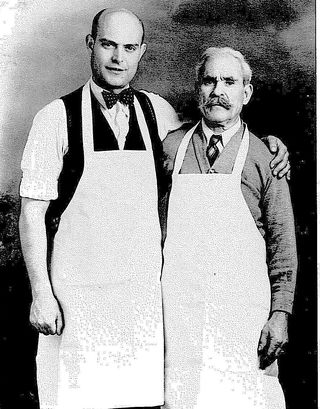 The miners in 1915 actually had a canary in a cage to check the level of breathable air in the mine. The pay was minimal and work very hard. Dad was always an ambitious person and managed to live the American dream.

In going through a file I found a letter from my father dated May 15, 1990. He wrote me after I had obtained a record settlement in a case.  He typed on old fashioned Remington portable typewriter with a ribbon. It was usually full of typos and his spelling wasn't perfect, but he had a style of writing that was liking having a conversation with him. I had forgotten it was his dream to become a lawyer because of a childhood experience when a small boy. Here’s what he said:

"There is a story in the May 14, 1990 Newsweek about a 14-year-old, Jennifer Capriati and her father Steffeno. The story says that this 14-year-old tennis star will be a world champion someday. Her father Steffeno was watching her accomplishments after selling his real estate office to follow his daughter and it says he had dreamed as a boy in Milano, Italy of being a tennis star, but was never able to do it because of financial poverty. I am another example of the same thing.

Your Nonna (grandmother) Luvera was a professional cook for a wealthy "avvocato" (attorney) in Reggio, Calabria in Italy. The financial arrangements were that she could feed her family under age 14 years with leftover dinners and a few Lira per month. We ate after school, me, my brother Consolato, who was 18 months older than I was. My sisters Antonietta and Caternia, my brother Salvatore and my sister Rosina were past age 14 and two old to participate. The arrangements that mother told us after school we were very quietly to come through the servants quarters to the kitchen. Mother would have everything laid out for us and we were to politely clean the plate and leave very quietly. Well, curious Paolino (my father) had to see what’s in the rest of the house. So when mother wasn’t looking and the others were eating, I sneaked out and saw the most luxurious place I had ever seen. Chandeliers, silver sets, silver eating tools, hand carved furniture and oriental rugs.(I had I never knew what oriental rugs were until I was a grown man) Mother had told me he was a famous avvocato in Reggio. I said to myself: "Boy, if that’s what the avvocati have in their home, that’s exactly what I’m going to be when I grew up." So I have grown up with that luxury in mind. I have never forgotten. Not necessarily that I wanted to be a lawyer, but, for being a famous avvocato who could afford to have a house like that.

Well son, my dreams of being a famous attorney stopped in the seventh grade when I went to work in the coal mine with my father in Coleman Alberta. But, like Steffeno Capriati watching his daughter Jennifer winning championships, I’m watching our son Paulo Nicola Luvera II being one of the best avvocati in the State of Washington. So is your mother enjoying your successes as I keep dreaming as a young squirt, even while working in the coal mines – boy, how I hated that job.

Your mother and I, who come from a modest family, full of love and teaching good manners and respect elders are so proud of all of you. With much love, dad"

One thought on “DREAMS OF MY FATHER PAUL LUVERA SR”