I've just finished reading a book by Michael J. Sandel: Justice What’s the right thing to do. The entire book is well written, but here two passages about things I thought particularly of interest.

The first deals with the tobacco giant Phillip Morris. The present governor of Washington asked me to be lead counsel in litigation against the tobacco industry when she was Attorney General. After a two and a half 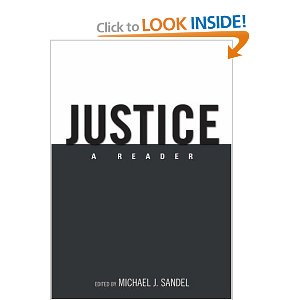 month jury trial there was a national settlement, but the information I obtained during that time about the tobacco industry was shocking. Their knowledge of the harm of smoking and their concealment of vital information to public health was beyond evil. Phillip Morris was a leader in the matter of callous attitude about public health, so this part of the book was consistent of my impression of the company.

"Philip Morris does big business and the Czech republic where cigarette smoking remains popular and socially acceptable. Worried about the rising health-care cost of smoking, the Czech government recently considered raising taxes on cigarettes. In hopes of fending off the tax increase, Philip Morris commissioned a cost-benefit analysis of the effects of smoking on the check national budget. The study found that the government actually gains more money than it loses from smoking because while smokers cost medical expenses while they’re alive they die sooner than other people so that the government saves in the long run. Philip Morris calculated the net gain to the treasury at $147 billion per year. This analysis proved to be a public relations disaster for Philip Morris. An anti-smoking group ran newspaper ads showing the foot of a dead person in a morgue with a price tag of $1,227 attached to the tow representing the savings for each smoke related death. Faced with public outrage and ridicule the chief executive of Philip Morris apologized."

There is a decline in general truth and honesty in our society today. Greed seems to be a primary motivation for big business and many people. This motive often involves lies and falsehoods so this passage of the book was inspiring to me.

"For some years ago at the national spelling bee in Washington DC a 13-year-old boy was asked to spell echolalia, a word which means a tendency to repeat with whatever one hears. Although he misspelled the word, the judges misheard him, and told him that he had spelled the word right allowing him to advance. When the boy he realized he had misspelled the word, he went to the judges and told them. He was eliminated. He told the New York Times: quote the judges said I had a lot of integrity, the boy told reporters. He added that part of his motive was, quote I didn’t want to feel like a slime."