Justice Antonin Scalia recent agreement to speak at the Tea Party Convention puts this controversial member of the U.S. Supreme court in the ethical spot light one more time. While there are ethics rules in place for lower federal court judges, there is no explicit code of ethics for the nine Supreme Court 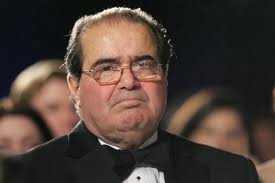 justices.He was appointed to the court in 1986. Since his appointment he has engaged in a continuous series of activities which call into question his awareness of judicial ethics. He also is known for his undiplomatic questioning of lawyers arguing before the court as well as his scathing dissenting opinions that often attack fellow judges.

His ethically questionable conduct includes a pheasant hunting trip in October of 2001 as a guest of the Kansas governor, during a time when the U.S. Supreme court had two cases before it challenging Kansas law. The man who made the arrangements and paid for his travel to Kansas was the lawyer who argued both cases for the state of Kansas. Two weeks after the trip the same lawyer was back in Washington arguing before the Supreme court for the state of Kansas. Several months later the court found in favor of Kansas.

In January of 2004 Justice Scalia and his daughter went on a private duck hunting vacation as the guests of Vice President Dick Cheney. That trip took place only three weeks after the court accepted review of a highly publicized lawsuit to force the vice president to release documents relating to his private meetings with energy executives and their lobbyists. When he was questioned about it he said:  "I do not think my impartiality could reasonably be questioned." (Federal law says "any justice or judge must disqualify himself in any proceedings in which his imparti9ality might be questioned.")

In April of 2004 Justice Scalia ordered U.S. Marshall’s to seizure the tapes of reporters who had tape recorded his speeches before two religious schools in Mississippi.

When Justice Roberts was sworn in as the 17th chief justice of the United States every member of the court was present except Justice Scalia. He was instead on the tennis court at one of the country’s top resorts, The Ritz-Carlton hotel in Colorado sponsored by the Federalist Society. He played tennis, went fly fishing and socialized with the members of the conservative organization who paid all his expenses.

Justice Scalia and Justice Thomas attended seminars in Palm Springs sponsored by Koch Industries, the energy giant with their expenses all paid for by the company. The company is a long time sponsor of conservative causes.

Now Justice Scalia has agreed to be preside as a speaker when the Tea Party holds it’s first conservative constitutional seminar next month in spite of the appearance of doing so. This party is exactly the kind of organization no justice of the supreme court should participate in a seminar with. The meeting will be behind closed doors.

The justice keeps insisting that in spite of appearances the American Public should trust his ability to remain impartial. However, the circumstances continually call into question the supreme court’s impartiality. Any activity which raises reasonable doubts about his or her ability to decide a case fairly should be avoided as a matter of ethical principle.

Herman Schwartz, a law profession at American University has said: "He truly reflects the arrogance of power. He doesn’t give a damn." The New York Times has printed an editorial questioning his attendance at the Tea Party Convention. Other media outlets have expressed dismay at his antics and his completely unrestrained conduct. Some see Justice Scalia and other conservative members of the court as treating the federal government as their private domain for advancing their personal political agenda.