Everyone of my generation recognizes the famous photo of U.S. Marines raising the American flag on Iowa Jima taken in World War II. The photograph was taken by Joe Rosenthal which shows five U.S. 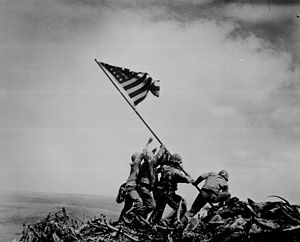 Marines and a U.S. Navy corpsman raising the flag during the battle of Iowa Jima. The photo was instantly famous and was reprinted thousands of times. It is probably the most reproduced photograph of all times. It was the only photograph to win the Pulitzer Prize for Photography the same year the winning photograph was taken. Three of the six men in the photo were killed in battle: Franklin Sousley, Harlon Block and Michael Strank. The three survivors became celebrities: John Bradley, Rene Gagnon and Ira Hayes.

Why were we fighting over this tiny island? Because it was located about half way between Japan and the mariana Islands where we had our long range bombers used to bomb Japan. The Japanese used the island as an observation location to warn mainland Japan of any incoming bombing runs. In addition, Japan considered the island part of Japan itself, so that loss of the island was considered loss of a part of Japan. Defending the island was a matter of honor as well as military logic. The Japanese troops were ordered to defend it at all costs.

This was the only U.S. Marine battle where the American overall casualties exceeded the Japanese. 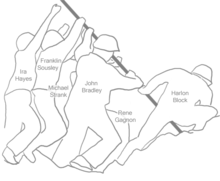 There were some 22,000 Japanese soldiers on the island and their determination to hold the island all costs is shown by the fact 21,569 died from fighting or in suicide. Only 216 were captured. There were 26,000 American casualties which is more then the total of allied casualties on D-Day. Keep in mind the U.S. Marines and soldiers fighting on Iowa Jima were seventeen to nineteen year olds. A twenty year old was called "an old man." These youngters were our fighting troops.

The most important part of the island was the 546 foot Mount Suribachi because it was the observation point for the Japanese. The island was well fortified with a network of bunkers, pillboxes and underground tunnels. This is where the flag raising took place.

The famous photo was actually the second flag raising that day. Suribachi had been captured on the morning of February 23, 1945. The flag raising occurred while Secretary of the Navy James Forrestal was on a Navy ship and decided he wanted the flag as a souvenir. But, Battalion Commander Chandler Johnson decided that the flag belonged to the battalion. So, he decided to do a second flag raising, keeping the first flag and giving the second one to Forrestal.

Rosenthal, along with Marine photographers climbed Suribachi and reached the summit as the Marines were attaching the flag to an old Japanese water pipe. He had a Speed Graphic camera and as the men began raising the flag he snapped the picture without using his viewfinder for fear he would miss the shot.

James Bradley, son of one of the flag raisers wrote a wonderful book about this: Flags of Our Fathers. He describes what happened to the flag raisers who died fighting and the survivors after they returned home. Mike Stank died on March 1, 1945 when he was hit by a mortar. Harlon Black took over leadership of the unit when Stank was killed. Twelve hours later this 21 year old was killed by a mortar on March 1st. Franklin Sousley was the third flag raiser to die. The 19 year old was killed on March 21st. Ira Hayes was a Pima Indian from Arizona. President Truman told him he was an American hero, but Hayes later said "How could I feel like a hero when only five men in my platoon out of forty five survived?" He and the other survivors participated in war bond rallies around the country and he returned to the reservation. He died of alcohol disease at age 32 in 1955. Rene Gagnon was the youngest of those who raised the flag and was the first survivor to return to the U.S. He died in 1979. John Bradley was a Navy Corpsman, "Doc" to the men who returned home and spent his life avoiding media attention because he did not consider himself a hero. To him, the hero’s were the men who did not survive. Bradley died in 1994.

One interesting fact was that several days after the flag raising and celebrations on Suribachi, a cave near to where it went on was discovered. Inside were 150 dead Japanese who had committed suicide just hours before they were discovered and therefore were alive during the flag raising.