Many of us can point to someone or perhaps several people who played significant roles in our life. People who made the difference or who were a tipping point at a critical time. Perhaps it was someone whose words or actions changed  the direction of our life for the better.

For me, after my parents, it is a short list of individuals who had a very significant influence on my life. It includes a third grade teacher, Mrs Marshall, always saw the good in me even in the face of considerable evidence to the contrary including her interpretation of my very poor grades. In later school years  a high school basketball coach, Bill Taylor was a significant turning point for me. In college a Catholic priest, Fr. William Dooley influenced an important decision about my future. He was the chaplin at the the Newman Center at the University of Washington in 1953 when I started college. He played an instrumental role in my decision to give up a sports scholarship and leave the University for St. Martin's College in Lacy. And in my young career as a lawyer there were a handful of lawyers in Mount Vernon who acted as my advisers and mentors. These include my first employer who was the prosecuting attorney, my later law partners and great trial lawyers like Alfred McBee all of whom played an important role in making me a better lawyer.

But, among all of these, Bill Taylor was the single biggest influence in my life when it counted the most. William H. Taylor was born March 11, 1922. He  died January 24, 2002 in Anacortes, Washington at 79 years of age. He was a great natural athlete who played baseball and basketball for the University of Washington He graduated from the University of Washington in 1949. He flew fighters in the Navy and eventually became my high school basketball and baseball coach in Anacortes. The town had always been a basketball town very much like the one portrayed in the movie Hoosiers about a high school team in Indiana and the town's devotion to basketball.

When I was in the 7th and 8th grade I was a huge fan of the high school basketball team and it's players. I wanted, in the worst way, to play on an Anacortes team. One of the high school players I admired was Jack Symonds, who later died in an plane crash in Alaska. My player number, when I later played on the high school team, was 88 because that was Jack's number when he played.  I attended all the games.I turned out for the 7th and again 8th grade teams, but I wasn't very good. I spent most the time on the bench and my grades were poor. I was a discipline problem in school and my parents were concerned.  and I was getting into trouble in a lot of ways.

I don't know if my dad put him up to it or not, but one day Bill Taylor made it a point to find me and tell me he 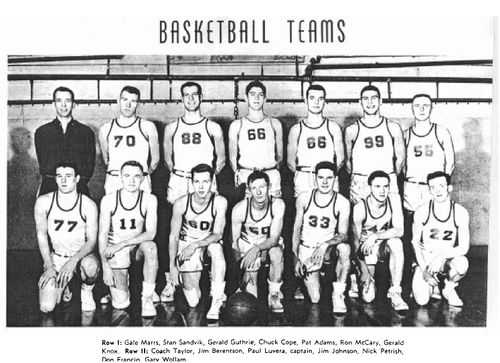 thought I had potential as a basketball player. He said all I needed was  to practice and especially  bring my grades up. He took me to the gym and showed me what shots he wanted me to practice. He told me I was to practice these shots . I was so impressed that I had dad install a hoop at home and practiced even after dark with the garage lights on. I was very determined to become the player Taylor said I could become. All summer and kept it up. That one encounter gave me a purpose and got me going in a different direction. When I got to high school I did make the high school team. I played on the varsity team, was named captain my senior year and had other accomplishments as a player all because of Bill Taylor.

However, making the team wasn't the most significant change Bill was responsible for. He was also was an adviser to the high school Key Club organized under the Kiwanis club. It was intended to teach leadership and community responsibility. Bill got me involved in Key Club. One year he took a number of members to the 1952 Pacific Northwest District Convention in Auburn, Washington. As club representative, I gave a talk at the convention and before the convention was over I had somehow been elected the Regional Key Club Governor. This was the first time a Governor had been elected from our district and the first from Anacortes. It was so unexpected that I had to borrow a sp 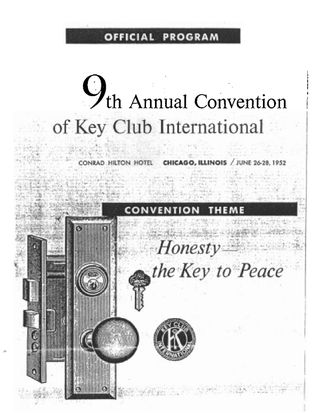 orts coat from the father of the host family I was staying with. The man whose coat I borrowed had a son, my age, Norman Roberts. By strange coincidence Norman and I ended up in the same class at Gonzaga Law School.

The position of Governor required me to give speeches around the state at service clubs, key clubs and different organizations. Bill helped me develop a speaking skill and encouraged me. We held the first ever Pacific Northwest District Convention in Anacortes which I chaired with Bill's guidance and continued encouragement. As a result  I developed confidence in speaking and an enjoyment in being in front of an audience. As Governor I also traveled alone to the 9th annual convention of Key Club International in Chicago, held at the Conrad Hilton Hotel in June of 1952. I went vy train. I had never been farther away from Anacortes then Seattle before. I gave a short talk to the huge crowd. I remember the National President was Ted Vestal from Sherman, Texas.

My senior year I was elected student body president of my high school and commencement speaker at graduation thanks to Bill Taylor's influence on me. All of this because Bill Taylor took the time to encourage me. I am convinced that as a result of these experiences I became a trial lawyer.

Lita and I are proud of having created the William H. Taylor Scholarship fund with the Anacortes Noon Kiwanis Club for Anacortes high school students.  Students exhibiting leadership, scholarship and involvement in student as well as community affairs are given college scholarship awards. We also contribute to the Anacortes Hospital Foundation in the name of Bill's wife Dorothy "Ho" Taylor. This is because of the enormous debt I owe to William Taylor who was my positive tipping point at a critical time in my life.

This is in honor of William H. Taylor, great coach, my mentor and man of great moral character. His positive influence helped shaped many young men during his tenure at Anacortes High School. He deserves to be recognized for this.