A short article in the March Phoenix Magazine prompts this report. It featured a picture of Arizona cowboys, in 1913, moving a large number of ostriches from one location to another. It pointed out the importance of ostrich farming in the 1900's due to the demand for the plumes used in women’s hats. The article went on to say that as the cowboys and the ostriches moved down the road, a husband and wife in their surrey were approaching in the other direction. The horses on the surrey startled the ostriches who 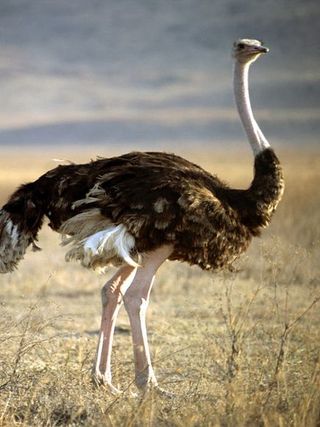 then "stampeded." The horses were terrified and overturned the surrey. The man survived, but the woman was killed by the surrey. The article says that by 1914 ostrich farmers faced ruin because the once stylish plumes on women’s heads went out of fashion. That report got me wondering about ostriches capable of scaring horses and cowboys herding them like cattle. I decided to look them up to see what I can could find out about them. Now, you too, can know all there is to know about ostriches and impress your friends.

It turns out ostriches can’t fly and they are the largest living bird in the world. They are native to Africa and thrive in places that are hot with dry climates. They are a big bird. The males grow to eight to nine feet in height and weigh from 350 to 400 pounds. The females weigh from 300 to 350 pounds. They live to 50 to 75 years old

Since they don’t have teeth they eat rocks to help grind food in their gizzard. An ostrich hen can lay 40 to 100 eggs a year and the eggs hatch in 42 days. (Chicken eggs hatch in 21 days) Their eggs taste like chicken eggs, but it takes 1.5 hours to hard boil an egg. The female is capable of recognizing her own eggs even if they are mixed with others in a nest. An ostrich egg can weigh up to three pounds which is equal to two dozen chicken eggs.

They don’t need to drink water because they get adequate amounts of water from eating plants. They prefer to live in groups and with their long necks, have excellent vision. Their eyes are almost two inches across – the largest of any land animal – and has three sets of eyelids.

Ostrich meat looks like beef and is cooked in a similar manner. The meat is very low in cholesterol and calories plus being almost fat free. It tastes somewhat like beef.

So, do ostriches bury their head in the sand? The answer is no. While the male digs holes for the eggs, he doesn’t bury his head to hide as the story goes. Ostriches will hiss, stamp their feet, flare their wings as a warning when they sense danger. They have a powerful kick, but it is backwards, not forwards. The huge single toenail and the tremendous power of their kick can kill a human or a predator including a lion. Their powerful, long legs can cover 10 – 16 feet in a single stride.

Their brain is about the size of a ping pong ball so they are not Rhodes scholars in IQ. While they can’t fly, they can run at speeds up to 40 miles per hour. They only have two toes on each foot which helps them run fast.