My father in law, Hollis Barnett died on March 22nd 1990. He was a unique and wonderful man. You can read about his extraordinary wife Betty Barnett and more about this couple who I grew to love.   https://paulluverajournalonline.com/weblog/2010/03/i-write-this-in-memory-of-my-wifes-father-hollis-hall-barnett-whodied-in-puyallup-washington-on-march-22-1990-at-the-a.html

Hollis Hall Barnett died in Puyallup, Washington on March 22, 1990 at the age of 83. Hollis  was born in Buckley, Washington on May 3, 1907 and spent his younger years at Mt. Rainier National Park where his father, Herman "Herm"  Burke Barnett, was a ranger. Her 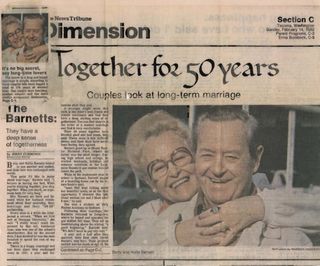 man was born in 1882. He lived in Marysville for a time and moved into the Big Bottom County to work on Packwood's coal mining claims. Herm held various jobs as a surveyor in the summer and a trapper by winter, and established a homestead near Packwood. In 1915 , Herm became a Park Ranger at Mount Rainer Nation Park. Herm and his wife Ethel  resided at various places in the park until Herm's retirement in 1945. His Mother, Ethel Mae Hall Barnett had one other child. Her name was Zelma Devlin.

Hollis had grown up in the park where his father, Herm, worked. Hollis  worked as a temporary ranger in the park while growing up. After high school he went to Spokane to attend Gonzaga University.

Hollis and Betty met when she as a senior at Holy Names High School in Spokane and he was at  Gonzaga University. Hollis was staying in a boarding house run by Betty’s aunt and they 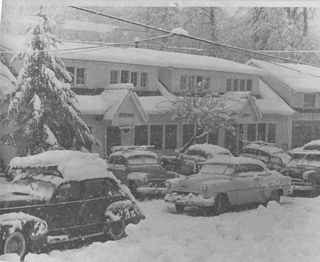 met and married November 16, 1931 in Seattle where he had found work operating a gas station to support them. Then, in 1937, Hollis was offered the operation of a small gas station located at Longmire inside Mount Rainier National Park.

While working at the gas station in 1937 Hollis learned that land owned by the Park Commissioner Edward Hall was for sale. He decided to buy property located right at the entrance to the park as an ideal location for a gas station and restaurant. Hall had a 160 acre homestead which is where Nisqually Park is now located and agreed to sell 14 acres out of the SE corner of his property to Hollis and Betty.

Hollis talked a number of their friends into helping them construct the first Gateway Inn. Their friends also helped them construct the initial motel units. The units were cheaply constructed and there was a common out house for use of the motel guests, until bathrooms were later added. They lived in a small room in the back and the log cabins were added later to rent to travelers.

This was a family run resort that served food, sold gas and provided small log cabins for overnight guests. They also rented ski equipment and had a small store inside as well. Everyone in the family worked at the resort. Later the Texaco Company agreed to allow them to sell gas.

A major flood destroyed the cabins and they had to be replaced in the late 1960's. There was a French Canadian in his late 60's named Jean Baptiste Cote who Hollis hired to build the log cabins. All of the logs were cut down from the property in the back and hand peeled and skidded with a pickup to the site where the cabins were constructed.

After many years of working long hours at Gateway Hollis and Betty sold the business and retired to Puyallup where they enjoyed reading and traveling. They had spent their whole married life working together and enjoyed each other’s company in retirement as well

Hollis had the ability to "talk to the animals." Not only animals, but ravens and birds would come out of the woods and fly from trees to

come to him. He would talk to them in the noises they instinctively made. It probably also helped that he always had food in his pockets for them. All of this was good for business at the resort because tourists driving by would slam on their brakes to photograph the animals.  One  time when he took my nephew Devitt and me to The Point Defiance Zoo. Hollis loved going to the zoo and once there he would walk around making animal sounds and talking to the animals. He had the lions roaring, the monkeys all chattering and all the caged animals growling and huffing and in a complete uproar. A Tacoma News Tribune reporter happened to be there that day and saw all of this. Without saying anything to dad he wrote an article in the News Tribune about the amazing man who could talk to the animals and they all talked back. He labeled Hollis "a modern day Dr. Doolittle."

Sometimes a bear would break into the back of the kitchen porch and force open the refrigerator door that was on the back porch. The bear would pull out trays of porterhouse steaks and run with them to woods. Finally, Hollis wired the step with an electrical charge to keep the bear away. It worked but, one day a mother bear arrived with cubs and she pushed one of the cubs up the stairs. Apparently testing to see if it was safe for her.

Herds of deer roamed the property and most of them Hollis had named. During hunting season he would grab the males and saw off their antlers to look like a doe instead of a buck with a rack of horns. He would also attach red hats to his favorites so hunters wouldn’t shoot them.

Hollis was very entertaining because he knew so many poems and limericks by heart. He would recite them all the way from Mt. Rainier to Tacoma and back. He knew almost all the Robert Service Poems as well as classic English and American poetry. Lita, my wife's  personal favorite as a child was a poem called " Sugar Tooth Dick" that he could recite, but I've never found a copy of the poem, so perhaps he made it up.

Lita says her dad had pet names for every one. If you were in trouble… he would call you a " little polecat" His name for me was "dolly bug"… when I wasn't a"polecat." Lita remembers him singing to her as a small child and that he would often times would make up songs like "Lita Lou losing her shoe."

When I think of Lita's dad I think of him with a twinkle in his eyes. They would literally crinkle up and get a smile when he was about tell a joke and he had hundreds of jokes he loved to tell. He had you ready to laugh before he even told the story or joke and he was a wonderful story teller. He had a wonderful sense of humor and was fun to be with. When Betty died Hollis was devastated and really never recovered from losing her. She was a very special woman and so was he. I miss them both and wish I could be half the decent and good human being Hollis Hall Barnett was during his life.