Probably the greatest golfer who ever lived is someone you are not likely to have ever heard about. Murray Norman was born July 10, 1929 and died at age 75 in Canada September 4, 2004. Known throughout his life by his nickname "Moe" he was brought up in Canada and played golf his entire life.

This is a man who won fifty five Canadian tournaments, was the Canadian PGA champion two times. He set thirty three course records. His records include three 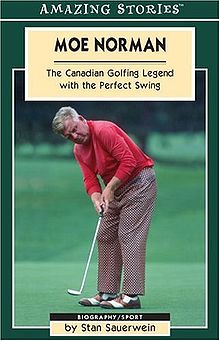 scores of 59 and four with scores of 61. Moe turned 50 in 1979 and won the next seven Canadian Professional Golfer's Association senior championships. He came in 2nd in number 8 and won the 9th by 8 strokes.

He also had seventeen holes in one. Moe had 3 holes in one in one day. In the late 1950's, Moe would play 54 to 72 holes a day. One particular day including 54 holes, Moe had a hole in one each round, the longest being a 3 wood and the shortest a 6 iron.

He was inducted into the Canadian Golf Hall of Fame and the Canadian Sports Hall of Fame. He shot a course 61 four times in 1956. He never hit a ball out of bounds. Everything he hit went straight. Never right nor left.

In 1966 Moe played in 12 Canadian PGA Tournaments. He won five and he came in second five times. He averaged 17 fairways and 17 greens in regulation. He had a scoring average of 68 strokes around, the lowest single year stroke average of any one to ever play the game.

His control was so accurate he once hit 356 consecutive drives off of a standard wooden golf tee without ever so much as moving the tee. In fact, for years he used the same tee over and over. He used to hit golf balls sitting on the neck of a glass Coke bottle without moving the bottle. He could do amazing things with a golf ball and his control and accuracy were incomprehensible. The famous and great golfers studied his playing ability.

His swing was not a thing of beauty. The "Norman swing" produced an amazingly accurate ball. He gripped the club with his palms, not his fingers and would 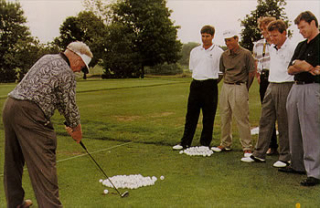 stand with legs widespread. The club would come back to the level of his right shoulder and virtually no turn while finishing with the club pointing to the sky. He swung the club like a sledgehammer. Most spectators who not seen him play before thought he was clowning around when they saw how he hit the ball. He played extremely fast, sometimes not even slowing to line up his shots. He never took a golfing lesson.

Norman began playing at age twelve when he started to caddy at a local golf club. He bought one club which he used to practice in the families tiny backyard by hitting balls against the neighbor’s garage over and over. Other members of his family made fun of him playing what they regarded as sissy game. Norman’s father wanted him to play a "man’s game" like hockey or baseball. His father would not let him bring the clubs into the house and he had to hide them under the front porch.

He grew up in a working neighborhood in a town near Toronto. In grade school he had trouble getting along with other children and struggled with all of the subjects except math in which he was a prodigy. He also had a phenomenal memory. He

could recite the yardage of virtually every golf ball he ever played and remembered every golf shot from every tournament that meant anything to him. He had a reputation as a deadly cribbage player because he remembered all the cards.

In 1949 he played in a one day amateur event. He had not been invited. He showed up and was given an empty slots. He had just seven clubs and carried them in a bag which was falling apart. Against the field of outstanding amateur stars he shot 67. He was too shy to attend the awards dinner and slipped away after finishing the round.

He spent much of his 40 year competitive career in obscurity and poverty. He never had a mentor, a manager, or sponsor. Sometimes he carried his own bag at tournaments because he couldn’t afford a caddy. He spent winters setting pins in a bowling alley for a few cents a line to support himself. At one point he was so broke only the last-minute intervention of friends prevented his car from being repossessed. He lived in a motel room, without a telephone and kept his clothes in the back of his car. Unlike other top amateurs didn’t belong to a country club. He often hitchhiked to and from tournaments and even supported himself by selling the prizes he won. Sometimes he sold the prize even before he won it. On at least five occasions he intentionally finished second because the customers he had agreed to sell the promised prize to didn’t want the first place prize, they wanted the second place.

So, why haven’t you heard of him? Because he was eccentric and avoided all publicity. He was deathly afraid of strangers He was very uncomfortable with strangers and had difficulty making eye contact with people he didn’t know. He did not like to be touched. He had no interest outside of golf. Norman wore long sleeve shirts even in Summer, which he buttoned to his chin. He liked bright colors and enjoyed mixing stripes with plaid clothing. His voice was very high and he spoke rapidly, often repeating himself.

He tried to participate in the U.S. pro circuit but his strange looks and actions bothered upset other golfers who complained. Norman was so upset he quit and returned to Canada.

He routinely drank 24 Cokes a day and had missing teeth to prove it. He had never had a phone, credit card or a date with a woman. He hid hundred dollar bills in his Cadillac trunk and wore 3 watches on his left arm all sent to the same time. He was obsessed with routine. He went to the same restaurant every day for months and insisted on being served by the same waitress.

In fact, when the movie Rain Man starring Dustin Hoffman hit theaters everybody who knew him said that was Norman. Physicians felt certain Norman was an autistic savant, but he was never tested and refused to see doctors until his life depended upon it. It’s speculated that his autism may be due to untreated head injuries suffered in a sledding accident when he was five.

Moe was unquestionably one of the most consistent and accurate golfers who ever played the game. Were it not for his autism he would have been one of the most famous as well.

One thought on “MURRAY “MOE” NORMAN “THE KING OF SWING””