When the rebellion against the dictator of Tunisia was reported by the media, the name of Mohammed Bouazizi was a central part of the reporting. Bouazzi was one of the poor young men in the town of Sidi Bouzid struggling to make a living in a country of unemployment and poverty. Bouazizi's income was from selling vegetables, something he had done for 7 years. He was one of many who operated 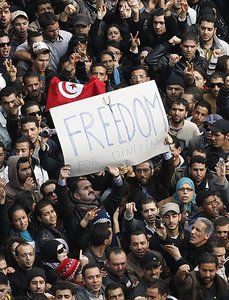 an unlicensed vegetable cart because the license was so expensive. He supported his family of eight with his cart. It was common for the police to extort money from the people operating these carts by citing them and demanding a "fine." On December 17th of last year a police woman cited him and after his protests, confiscated his scale which was needed to weigh the vegetables he sold. He offered her the regular fine of $7 for the violation, which was equal to a good day’s earnings. The policewoman was angry. She ridiculed him, slapped him, spit in his face and insulted his dead father.

Humiliated, Bouazizi, the breadwinner for his family, went to the municipal headquarters to complain to the local officials. They refused to even see him. Less than an hour later, and without telling his family, he returned to the street in front of headquarters and poured fuel all over himself and set himself on fire. He did not die right away but lingered in the hospital before dying. The story first was told person to person and then became big news.

The publicity about his treatment and the corruption of the dictatorship so outraged the people that it became a spark for starting a resolution. When it was over, the dictator’s 23 year rule was over. Bouazizi became a national hero and his name was known throughout the world as the person who was responsible for the overthrow of the dictator. In this one man became the stimulus for similar revolts against dictators  in other countries in the region. One man’s actions triggered the overthrow of not just one dictator, but similar revolts by the people against dictators elsewhere.

Bouazizi is not the only person in history whose solo actions have caused enormous change for the better. In the early 400's A.D. Rome had become Christian and the Christian emperor was Honorius. There was a monk whose name was Telemachus from the East who had withdrawn into the desert to worship alone. After spending months alone in prayer and meditation decided that his duty was to serve his fellow man.  He decided to travel to the center of Christianity, Rome. He arrived at a time when Stilicho, a Roman general had gained a victory over the Goths. Stilicho was 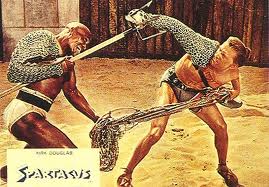 given a parade of triumph. As he rode through the streets with the young emperor Honorius by his side they led the crowd to the Coliseum. Even though Rome had become Christian the games still took place in the Coliseum. Those captured in war had to fight and kill each other for the crowds. Telemachus went with the crowds to see what happened there. Some 80,000 people filled the arena. After the chariot races and he gladiators came out and as they entered the arena they gave the traditional greeting: "Hail Caesar! We who are about to die salute you!"

The monk was shocked at what followed. The gladiators faught with swords trying to kill each other. He jumped over the barrier, ran out and positioned himself between two gladiators. He loudly protested at the sinful conduct and demanded it stop. The  gladiators froze, but then the crowd became enraged at the interruption of the games. Telemachus was soon stoned to death by the outraged crowd.

After it was over, and the monk lay in a pool of blood, there was a growing silence as the crowd realized that a holy man had been killed by them. On that day, generally given as January 1, 404 A.D., the emperor Honorius issued a ban on all future gladiators fights. In fact, that was the last gladiator fight ever held in the Roman empire. Telemachus became a martyr and the one person responsible for ending the bloodletting fights. One individual took action against something he saw as wrong and immoral, and that stopped an immoral practice throughout an empire.

The next time you think your vote doesn’t count or speaking out just won’t make any difference, think about these two people. In the movie Gladiator a general inspires his men before a great battle by telling them "What we do in life echoes in eternity." How true. Remember too, the poem that reads: "In youth, because I could not be a singer, I did not even try to write a song. I set no little trees along the roadside because I knew their growth would take so long. But, now, from the wisdom that the years have brought me, I know that it may be a blessed thing to plant a tree for someone else to water or make a song for someone else to sing."