Here are some viewpoints about President Obama from last Sunday's New York Times which I  think reflect the views of a growing number of people.

Michael G Brautigam wrote the paper a letter which I thought was insightful. He wrote:

“The headline and the art for Dr. Willenbring's letter suggested that our cerebral and detached president is playing political chess, but I see it more as high stakes political poker. For this vastly different game, the president is ill suited.

In poker one blocks and keeps one's cards close to the vest, but the president, believing he is showing good faith, can’t help tipping his hand, and the professionals at the table are eating him alive. 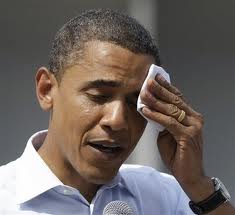 Mr. Obama has appeared tougher in recent days, but this is a style that does not suit him. If a naturally cautious poker player turns aggressive because he is forced to, he may get lucky with a hand or two, but ultimately he will lose far more than he wins.

In the poker world, Mr. Obama is a “nit” – a cautious, and non aggressive player who often folds despite having the best hand – and the Republicans will continue to take his chips for as long as he is at the table.”

Another writer observed  “… He has apparently now – somewhat belatedly – concluded that you can't be reasonable with unreasonable people. You can't collaborate with a group whose exclusive goal is to see you fail, even if the national interest is being ill-served.”

And another letter writer wrote: ”… Although they have repeatedly rebuffed and vilified him, Mr. Obama has tried to a fault to reason with Republican leadership and to offer compromises that go beyond reasonable. In doing so, he has forfeited goodwill and trust of many of us who voted for him in 2008, leaving us wondering if he stands for anything at all…”

In the absence of a change of political backbone on the part of President Obama and an improvement in  the economy we may end up having to vote for what someone once called "the evil of two lessers."