I have just finished reading a book, Flory, a story of survival, by Flory Van Beek. It is truly a miraculous account of survival of a Jewish woman and her family in occupied Holland during World War II. I have previously written about Edith Velman’s  book describing her survival as a Jew in occupied Holland. https://paulluverajournalonline.com/weblog/2007/01/edith_velmans_s.html Both stories are extraordinary tales of courage on the part of all the Dutch people, Jews & non-Jews during the German occupation.

Van Beek’s story is one of courage  and told in a captivating manner which holds your interest.  She was a teenage girl when the Nazi occupation began to threaten all of Europe in 1939. Jews throughout Europe had to flee, lose their homes, go into 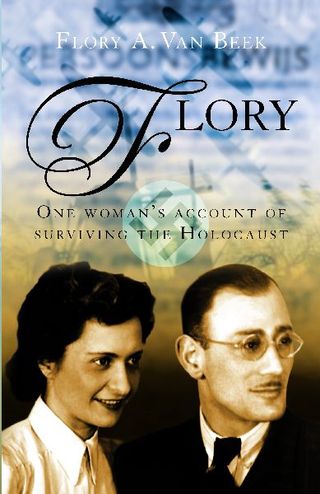 hiding or suffer at the hands of the Nazis. Yet her story is not unique in Holland at that time. Her story is similar to the story of other Jews who were hidden and protected by non-Jews in Holland during the German occupation.

It is the story of a 16 year old girl and her 28-year-old boyfriend, both Jewish, who survived the war. She and her husband were hidden at different times by three Dutch Christian families over a period of years during the time the German army occupied Holland.

She and her husband's story is one of a series of miracles that save them from Nazi death camps. The first miracle occurred in November of 1939. That's when she and her husband Felix attempted to sail on the SS Simon Bolivar passenger ship with other Jews who were trying to escape oncoming German occupation by sailing to South America. They had not sailed far when the ship was sunk by mines the Germans had planted in the North Sea.This was one of the first passenger ships destroyed by the Germans during world II. They both were severely injured in the explosion but were one of the few passengers who managed to be saved by a passing destroyer.  Almost all of the passengers died, but Flory and Felix survived to be treated for their injuries over a six month period in England.

After they had recovered in May 1940 they returned to Holland to be reunited with their families. However, a week later the Germans bombed Holland and the army invaded the country. Within a short time Holland was in the grip of Nazi occupation.  The Germans made life increasingly intolerable for Jews in Holland. Homes and property confiscated,food and jobs denied and every Jew ordered to wear a yellow star of David. Then another miracle occurred in June 1942. After the ship wreck and the suffering she and other Jews were enduring she walked to a canal in great depression with suicidal thoughts. A Christian, Piet Brandsen was on his bicycle when he saw her crying and stopped to talk to her. After llistening to her he told her to follow him to his house. Brandsen was a leader in the Dutch resistance. The family decided to take she and Felix in and hide them.The family constructed hiding places in their house and a warning system in case the Nazis came searching. In this situation they were cut off from the outside world and their families. Their only news of the war came from a crystal radio Brandsen had hidden in the house.

The couple married because Piet Brandsen and his family were devout Catholics and the husband did not think it was right that the two of them would be living together hidden in the attic of his house unless they were married. It was a marriage made in heaven because they were married for over 63 years

They experienced hunger and the ever present threat that they would be discovered and sent to a concentration camp. It was with this family that she and Felix were hidden for more than a year until Brandsen was betrayed by a Dutch collaborator. Another miracle occurred when the Gestapo who had come to the house to arrest Brandsen at first started up the stairs to search the area where the Van Beek's were hidden but the soldier who was coming up the stairs was suddenly ordered to come back down and they were not discovered. Brandsen survived his concentration imprisonment and was released after months of interrogation.

After escaping from the Brandsen house the rest of their story is one of being taken in by other Christian families. They were hidden at the risk of death for all concerned and they were fed even when there was widespread hunger for all the people of Holland including the families hiding them. The risk of death was daily present. For the rest of the German occupation they were cared for and protected by non-Jews. It is a story of courage and charity by all concerned.

What is extraordinary to me is that Flory's experience was not unique in Holland during that time. Throughout the country non-Jews had resisted the Nazi occupation and had taken into hiding Jews all over the country as well as maintaining an active armed Resistance. They did so in the face of immediate death if they were caught hiding the Jews. They did so with great sacrifice because of the shortage of food and necessities of life for the families hiding them. During the five-year ordeal of the Nazi  occupation of Holland the citizens of Holland in general were united in their outrage of the German occupation, their treatment and that or their fellow citizen Jews. Throughout the war they consistently did their best to resist the occupation as well as protect the Jews.

From a historical standpoint, Flory's situation is unique because she and her husband maintained diaries and collected records, newspaper articles and documentation of the German occupation of Holland. The collection was hidden in metal boxes and buried in the ground of the yards and of several non-Jewish families. After the occupation they recovered all of the material  and donated it to the Holocuast Musem.

Flores sister and a brother were also hidden by Dutch families and survived. However, her mother and other members of the family died in the gas chamber.  After the war she and her husband immigrated to the U.S. and lived in California.

Mel Gibson had planned to either make a movie or television program about this story until his drunken attack on Jews  and loss of support for the project.  In fact, the story would be a great movie for its inspiring message and the bravery of the people of Holland.

If you have the opportunity I recommend this book to your reading. You will be better for having read  it.