Our companion and friend for fifteen years, Napoleon, died October 4, 2008. Everyone thinks their dog was special, but this one was special. He really understood what we would say him, was very bright and intuitive as well as a great companion to my wife Lita and Julie who takes care of the house for us. We all were very attached to him and him to us. I was on a trip when he got sick. Lita and Julie had the

responsibility of taking him to the vet and spending his last hours with him. He is buried at our house with a marker honoring him.

Our other dog missed him as much as we did. We brought Josephine home when she was a pup and even though Napoleon was an Alpha male, she treated him as if he was her mother.  She adored him. They
were totally attached to each other. She followed him everywhere and imitated whatever he did. After Napoleon died Josie was lost. For weeks afterwards she searched for him everywhere and waited by the door for him. She would whine and look very confused. 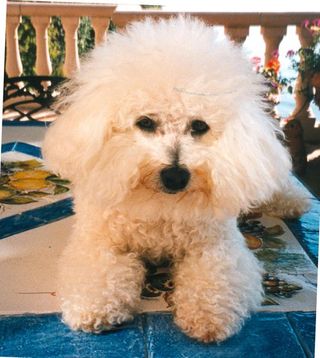 When I would come home from work I would make a big thing out of giving them both a treat. I would toss two treats and they would run as fast as they could to get them and eat them. After he died, one day, I decided to give Josie a treat and tossed it for her to chase after it as she always did. Instead of running after it, she waited, hesitated for some time as if she was waiting for Napoleon to run with her. Then she walked over to get the treat. But, instead of eating it, she carried it in her mouth to the little bed Napoleon always  slept in and dropped the treat inside. She laid down outside the bed, put one paw on the side of the bed and began to whine. After a short time she picked the treat up again and carried it upstairs to the window where she could see out towards the driveway and dropped it at her feet. Then she sat there for a long time staring out the window looking for her friend. I guess she was saving the treat for him.

For many weeks when we would go anywhere she and Napoleon had been to she would search for him. For weeks she waited at the back door staring out waiting for him. We couldn't say his name out loud around her because she would get so excited. She missed him as much as we did.

Judy Hopkins, Julie's sister wrote a poem about him, the title of which captures his personality
"Gentleman of the Harbor" and here is another poem I associate with Napoleon.

High up in the courts of heaven today
a little dog angel waits;
with the other angels he will not play,
but he sits alone at the gates.
"For I know my master will come" says he,
"and when he comes he will call for me."

The other angels pass him by
As they hurry toward the throne,
And he watches them with a wistful eye
as he sits at the gates alone.
"But I know if I just wait patiently
that someday my master will call for me."

And his master, down on earth below,
as he sits in his easy chair,
forgets sometimes, and whispers low
to the dog who is not there.
And the little dog angel cocks his ears
and dreams that his master's voice he hears.

And when at last his master waits
outside in the dark and cold,
for the hand of death to open the door,
that leads to those courts of gold,
he will hear a sound through the gathering dark,
a little dog angel's bark.

It is fitting that he died on the feast day of St Francis of Assisi whose love of animals is so well documented.