In the 1976 movie by Paddy Chayefsky, Network, actor Peter Finch plays the role of an ex-TV anchor whose mentally ill ravings are exploited by the network for their own profit as he unravels on the air mentally. Finch’s character, Howard Beale, raves into the camera:

“Howard:I don't have to tell you things are bad. Everybody knows things are bad. It's a depression. Everybody's out of work or scared of losing their job. The dollar buys a nickel's worth. Banks are going bust. Shopkeepers keep a gun under the counter. Punks are running wild in the street and there's no one anywhere that seems to know 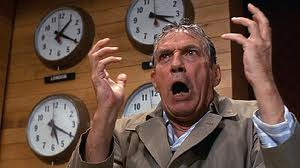 what to do with us. We know the air is unfit to breathe, our food is unfit to eat, and we sit watching our TVs while some local newscaster tells us that today we had 15 homicides and 63 violent crimes as if that's the way it's supposed to be. We know things are bad. Worse than bad. They're crazy.

It seems to me that’s exactly where we are in this country right now. Corporate greed, allowed to run wild by the Bush administration deregulation policy, created a 19thcentury robber baron capitalism. Monopoly money deception made the rich richer and the middle and poor class the victims. We elected a new president who promised change, but nothing really was healed and nothing really changed. Instead we had bonuses for the banks, oil companies and Wall street with renewed big bonuses to CEO’s. When you see on TV the long lines at food banks and the huge crowds at job fair you are immediately reminded of the same kinds of desperate people photographed during the Great depression. When you listen to the economists and the administration you are reminded of the Hoover administration trying to reassure Americans.

Congress is at a stalemate with Republicans exhibiting the arrogance of total refusal of all needed solutions.  In 2009 Senate Republicans filibustered 80% of all proposed legislation.The president’s approach of compromise was doomed from the start. Senate Democrats failed to take any effective action and all we got was lots of political talk. The problem is Congress’s failure to take a leadership role. In the face of the party of “No” Democrats stand clueless, as much to blame as the other side. Proposing a jobs bill to solve the problem and going around the country  promoting it when it is clear to everyone it will never get past the Republicans, is re-election politics. The White House silence following its quick defeat is significant about  their sincerity about promoting it.

People are out of work and can’t find work. They are being tossed out of their houses. They can’t afford medical care and Washington does nothing but engage in pointless  political talk. Of course people have taken to the streets in protest. Washington has had ample time to deal with this crisis but instead is in a total lockdown position.  It appears the Republicans will get their way and keep the situation desperate in order to elect one of their own. They appear to have decided that there is no serious consequence to maintain the present economic failure and that voters will blame the Democratic administration instead.  I think they are dead wrong. What people want helpful action now and they don’t care what the politics are in doing it. They aren’t going to vote a rifle. They are going to vote a shotgun at all of the Washington bunch. We watch the politicians on TV huff and puff at each other and we say to ourselves: “Don’t you get it? We are too desperate to play these political games. Just deal with our problems and do it now. Enough talk and political games. We have had it with all of you.” There is a justified feeling of hopelessness, desperation and deep anger at the politicians who play politics while the people suffer. It's time to say "I'm mad as hell and I'm not going to take it anymore."