In 1925 France had  recovered from the war and Paris was booming. It was a perfect environment for a scam artist like Victor  Lustig (1890-1947) who became known as The man who sold the Eiffel Tower – twice. http://en.wikipedia.org/wiki/Victor_Lustig  One day in May 1925 he saw an article in the newspaper that the city was having trouble paying for the cost of maintaining the Eiffel tower. He was 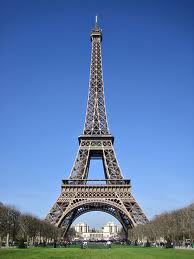 inspired with a new scam. He had fake government stationary printed and he mailed letters to the cities six largest scrap dealers. He represented himself as the deputy director general of the Ministry of Posts and Telegraphs. He invited them to a secret and confidential meeting to be held at the Hotel de Crillon, one of the most prestigious of the hotels of Paris.

When they arrived at suite, he introduced himself and told them it was an urgent matter requiring complete secrecy. He told them the government had selected them on the basis of their reputation. He explained that, as the newspapers reported, the city was having trouble paying for the maintenance and upkeep of the Eiffel  Tower. He said it was in need of immediate repair and that it had been intended only as a temporary structure for the 1889 Exposition. He shared with them the confidential information that things had reached a point that it had to be torn down rather than spend the millions required for restoration.  He said he had been charged with obtaining bids for scraping the structure, but they must keep this absolutely confidential. He told them

that bids had to be submitted by the next day.

Andre Poisson was one of the scrap dealers who decided to make a bid. His wife, however was suspicious as to the secrecy and the need to hurry. When Lustig was made aware of this, he arranged another meeting with Poisson only and shared with him his personal economic problems of being a government official and other statements which implied he wanted  a bribe. That convinced Poisson that he was dealing with a typical corrupt government official after a bribe he would have to pay if he wanted  to win the bid.

The next day Poisson provided Lustig with a bank document for 250,000 francs – about one million dollars in today’s money and slipped him a large bribe with it. In exchange Lustig gave him a very impressive bill of sale for the Eiffel Tower. He was told to wait for the government agency to contact him as to when he could start the scrapping process. Poisson returned home to wait and Lustig cashed the bank document. He caught the train to Vienna and dropped out of sight. After waiting several days Poisson made contact with the city officials only to learn there was no deputy director and no plans to scrap the tower. But, Poisson was so embarrassed he decided not to complain to the police.

After waiting a reasonable time, Lustig returned to Paris, selected six different scrap dealers and repeated the scam. This time the chosen victim went to the police before turning over any money, but Lustig managed to slip out of town before he could be arrested