In Vienna, Austria, it's reported that at the parish church near Innsbruck a first communion mass was held on April 22. The church was full of parents and relatives and the first Communion children. The parish priest, father Patrick Busskamp, announced that only Catholics who were in a state of grace should come forward for communion. He told them that Catholics who are divorced and remarried and Catholics who do not attend mass every week were not worthy to receive the Eucharist. When communion time came the entire congregation, except for the children, remained seated and refused to come up for communion as a united sign of  protest. 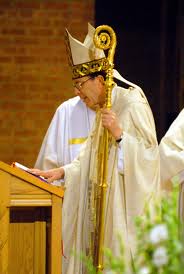 The Abbott, to which the parish belongs, said he regretted what had happened. "It was most unwise of him to act like this at such a ceremony. I have told him that. Behaving like a policeman shows a lack of pastoral sensitivity" he told the press. He went on to say that the church had to accept reality and while it's necessary to tell people about the rules that does not mean handling a situation as insensitively as this. More than 87,000 Austrian Catholics have formally left the church in the last two years. One mother of a first communion child said, given that fact, that it was incomprehensible that the remaining Catholics were being antagonized like this.

I am reminded of the quote from William Carlos Williams who said:

"it is not what you say that matters, but the manner in which you say it; there lies the secret of the ages"

Only two weeks previously a priest in the same diocese refused a woman communion because she had been married in a registry office instead of in church.

It was also in Austria that the Austrian Priest Initiative, claiming 400 members, released a document" call to disobedience." Pope Benedict commented about the document on Holy Thursday and criticized dissent from church teachings. The priests signing the dissenting document claim that it is imperative for the church to address such issues as priestly celibacy, women's position in the church and the right of the laity to have a say in episcopal nominations as well as the issue of homosexuality.

It was in Austria where the pastor demanded that a man who was living in a same-sex relationship re-sign after his overwhelming election to the parish council. Intervention by the Cardinal allowed him to remain on the Council. However the parish priest announced that he's seeking a new parish assignment because" living in sin cannot be the norm. I have a priestly conscience and respect divine and canon law." That was followed by a woman who made public that she had had an affair with the pastor for three-year period of time at his former parish. She said:" to hear him moralize like this and speak of sinners was just too much for me, so I decided to tell my story" Hypocrisy is rampant.

The church is also facing widespread and what some might call unprecedented outburst of support on behalf of the U. S. Women religious. This is because the Vatican's Congregation for the Doctrine of the Faith announced that it had ordered the Leadership Conference of Women Religious, the largest organization representing Catholic sisters in the country, to reform its statutes, programs and affiliations. It announced that it had appointed Seattle Archbishop Peter Sartain to oversee the changes that he had been given authority to make. Some of the reaction to the Vatican's announcement included a column in the New York Times by Nicholas Kristof who wrote that the Pope was "crazy to mess with the nuns" who he said were among the bravest, toughest and most admirable people in the world. There have been more than several reports around the country where the pastor in his homily has praised the U.S. sisters and the congregation has reacted by standing up and applauding.

in Ihe meantime It appears clear the American bishops have decided to pick a fight and take political sides in connection with the presidential campaign. Claiming dire threats to religious liberty the bishops said that president Obama had an anti-religious and anti-catholic bias and that religious liberty is being threatened. An Illinois bishop, in a speech, compared Obama to Otto Von Bismark and his campaign to close down every Catholic school and hospital, convent and monastery in imperial Germany. He went on to compare him to Joseph Stalin and Hitler saying: "This is a war and every believing Catholic may not remain neutral." He warned that every Catholic must vote their Catholic conscience in the next election, which, of course, means a Republican vote.

I have grown thoroughly tired of Vatican and American bishops dictating from the Vatican down without any involvement of the laity.  I have growing resentment about them telling Catholics which candidate they must vote for under implied threats of serious sin or even denial of the sacraments. I am disgusted with politicians like Catholic Wisconsin Representative Paul Ryan proposing a budget which denies the poor and uninsured assistance but claims it is based upon Catholic social teaching.

Whatever happened to the Catholic church that stood up for the worker, the poor and the oppressed? Why did the Church become obsessed with abortion and gay issues as well as obedience church authority, all to to the exclusion of the pressing reality of social needs, war and capital punishment? This the the church that once stood up the labor unions during the time of industry barons and focused upon the poor and those in need of protection from a capitalistic society. Now we have a church whose leadership is dragging it back to pre 1962 Vatican II church attitudes and teaching. A church who believes in Vatican issued decrees with non involvement and absolute obedience by priests and laity. Bishops who have joined the Tea Party Republican philosophy while carrying out the decrees of the Vatican.

Thank God for the sacramental church and the deeply spiritual pastors who still are found in parishes around the country.