Allan Island is located just west of Fidalgo island. It is a 292 acre private island. It was named by Charles Wilkes who led the first United States Navy expedition assigned to explore the Pacific Ocean in 1838. He surveyed Puget Sound and named dozens of landmarks including Elliott Bay. Wilkes obsessive behavior and harsh code of discipline was the inspiration for Herman Melville's Ahab in the book Moby 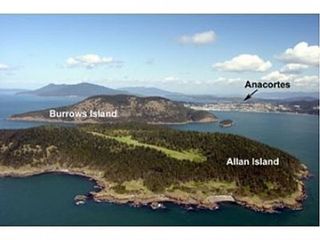 Dick. Wilkes named it in 1841 after Capt. William H Allen who was fatally wounded on a ship during the war of 1812.

Ironically Allan Island is owned by Paul Allen who bought it in 1992 for $8 million. It is undeveloped except for a caretakers cabin and a 2004 foot grass airstrip plus a boat dock. The island does not have electricity, but does have a generator. It is uninhabited but has been approved for 44 five-acre lots. There are three working wells that are capable of supplying all of the lots. The island is known for bald eagles, coyotes harbor seals and other sea and wildlife.

In 2005 Allen put the property on the market for $25 million. When no offers were received the property was removed from its listing and was then re listed four $13.5 million. This is not the only island property he owns. He also owns property in the San Juan Islands known as Sperry Peninsula located on Lopez Island.

Allan island is part of the 172 San Juan Islands where the “Pig War” of 1859 took place on San Juan Island near Friday Harbor. It all began with the 1846 Oregon treaty which established the 49th parallel as the boundary between Canada and the United States West to the middle of the Strait of Georgia and then by the main channel south to the Strait of San Juan de Fuca and from there westwards to the open ocean. See https://paulluverajournalonline.com/weblog/2012/02/fifty-four-forty-or-fight.html While both sides agreed that all of Vancouver Island would remain British the treaty didn't specify which channel the boundary would fall between the Strait of Georgia in the Strait of San Juan de Fuca. That led to a boundary dispute which escalated in the 1850s and remained unresolved.

On June 15, 1859, an American farmer who had moved to the island, found a large black pig rooting in his garden. This was not the first time this had happened and it upset him so much he shot the pig. The pig was owned by an employee of the Hudson Bay Company who claimed the owner was entitled to let the pig run wild on British territory. The controversy resulted in British authorities threatening to arrest the farmer. The American settlers on the island called for military protection. Local U.S. military commands sent Capt. George E. Pickett (of later Civil War fame) was ordered to San Juan Island. Pickett's 64-man unit landed on July 27 with orders to prevent the British from landing. Local British authorities on Vancouver Island sent three British warships in response. The situation continued to escalate with more warships and U.S. military response. The confrontation became known as the “pig war." When the administration in Washington D.C. and the leaders in London were informed they took action to prevent any blood shed. Before any shots were fired, both sides agreed to retain joint military occupation of the island until a settlement could be made. A British camp was established on the north end of the island and an American camp was created on the South end. This state of affairs continued for the next 12 years. The dispute was finally solved by international arbitration with Kaiser Wilhelm of Germany acting as arbitrator. A three-man commission met in Geneva and finally decided in favor of the United States establishing the boundary between the U.S. and Canada through Haro Strait.

On November 25, 1872, the Royal Marines withdrew from English Camp. By July 1874, the last of the U.S. troops had left American Camp. Peace had finally come to the 49th parallel, and San Juan Island would be long remembered for the "war" in which the only casualty was a pig.