This is a an unusual true story from history about a lawyer who died while defending a client in a murder case under peculiar  circumstances.

Clement Vallandigham was an Ohio politician and lawyer. He was the leader of the copperhead faction of the antiwar Democrats during the American civil war. He was a strong supporter of constitutional state’s rights. He believed the states had the right to withdraw from the union and was anti Lincoln. During the Civil War he gave a speech charging that the war was being fought not to save the union but to free slaves 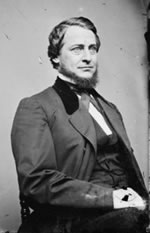 by sacrificing liberty of Americans and called for Lincoln's removal from the presidency. As a result he was arrested in violation of Union General Ambrose Burnside’s infamous General Order 38 which made it illegal to criticize the war. The Order provided that violators would be tried as spies or traitors and subject to death if convicted. Vallandigham was arrested, denied habeas corpus and was convicted. He was sentenced to two years in a military prison.

His public statements that he did not want to belong to the United States any longer was the inspiration for Everett Edward Hale’s short story The Man Without a Country which appeared in the Atlantic  Weekly  in December 1863 and has widely been  republished ever since.

In 1871, at the age of 50, he was defending a murder case in Lebanon, Ohio. The defendant was charged with killing a man and a bar room brawl. It was Vallandigham’s defense theory that the victim had in fact killed himself accidentally while trying to draw his pistol. He was conferring with the other defense attorneys in his hotel room one Friday night when one of the defense lawyers, Governor McBurney, expressed doubts about his defense theory of how it had happened. There were two pistols on the table, one unloaded and one loaded. Vallandigham grabbed one the pistols and said he would demonstrate how it had happened. He put it in his pocket and  then  he withdrew the pistol, keeping the muzzle next to his body. By mistake, he had picked up the loaded pistol and just as it was coming out of his pocket it fired. The bullet entered his body on the right side of his abdomen below the ribs, exactly where the deceased had been shot.

He remained conscious while doctors were called. After the doctor arrived he probed the body looking for the ball but was unable to find it. His condition became worse and around midnight the doctor asked him if he was aware of how serious his condition was. Vallandigham calmly said “Yes.” About 1 a.m. his son arrived and talked to his father. Vallandigham gave his son directions about taking care of his mother told him to be a good boy. The pastor of his church his arrived to console him and he expressed full confidence in the teaching of predestination. He died just before 10:00 am the following morning, June 17, 1971. He was buried at Woodland Cemetery in Dayton Ohio.

The defendant in the case was later acquitted of all charges.