On Thursday of this week, the U.S. Supreme Court will announce its decision about the Obama administration's Affordable Care Act. The political implications of that decision are obvious and the overwhelming odds favor an adverse treatment of the Act by the conservative block on the court. Chief Justice John Roberts, appointed by George Bush, is the most conservative justice since the early 1970s, when Richard Nixon named Warren Burger to replace  the famously liberal Earl Warren. Clarence Thomas is the most conservative of the group. Antonin Scalia was appointed by Ronald Reagan as was  Anthony Kennedy. Samuel Alito was appointed by George Bush. The four horseman of Republican politics, Roberts, Scalia, Alito and Thomas can be counted on for  predictable conservative decisions with Kennedy representing the swing vote. It is the predictability of right wing decisions that undermines the traditional viewpoint this court is above personal agenda and politics.

In fact, according to a poll conducted by the New York Times and CBS News http://www.nytimes.com/2012/06/08/us/politics/44-percent-of-americans-approve-of-supreme-court-in-new-poll.html?pagewanted=all just 44% of Americans approve of the job the U.S. Supreme Court is doing. 75% of Americans believe the court’s decisions are influenced by their personal or
political views.  This poll confirms thefact that the court’s standing with the American public has fallen significantly in the past quarter century. In the 1980’s the approval rate was 66% and by 2000 was  50%. This decline stems from American’s growing distrust in recent years of corporations and government. It is due in part, as well, to the 5-4 decisions in Bush v. Gore, which determined the 2000 presidential election, and Citizens United, the 2010 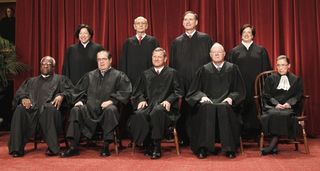 The majority of Americans are right.This is the most politically motivated U.S. Supreme Court in recent memory. There is a reason for this fact. Carl Rove had an agenda for the court and George Bush was responsible for fulfilling the agenda goals. Rove’s goals were to: unleash unlimited campaign spending, defund union political spending along with defunding trial lawyers and other key Democratic contributors while allowing unlimited corporate power. It was Rove who selected Roberts and Alito to enact this political agenda by Bush appointments.

This is merely part of a general Republican agenda. For at least a quarter of a century the Republican Party has made the creation of a political Supreme Court one of its primary goals. The result is a court that is far friendlier to the powerful than to the individual citizen.

The culmination of this goal is the court’s decision in citizens United in which they concluded that contributions made by corporations do not give rise to the “corruption or the appearance of corruption.” That conclusion is ridiculous because it contradicts common sense and history. This ruling gives Rove unlimited money to spend while simultaneously cutting into the funding stream from trial lawyers and labor groups that primarily supports Democrats. This court has now become a branch of the Republican Party.

Chief Justice John Roberts worked for President Reagan. Justice Clarence Thomas's wife, Ginny Thomas, has worked for Republican Congressman Dick Armey, The Conservative Heritage
Foundation and a Tea Party affiliated group called Liberty Central which lobbied against the healthcare law. If those are groups you hang out with on weekends how likely are it you'll be able to give the affordable care act a fair shake. What would happen to Thomas socially if he were to vote to uphold he law?

Look at this court’s split decisions since Bush v Gore. In Knox vs SEIU local 1000, the court in a 5 to 4 ruling held that unions must seek approval before using members’ dues for political purposes. In Dukes vs Wal Mart this court rejected class-action sex discrimination case in a way that largely prohibits all large class-action suits brought under the discrimination laws. In fact all consumer class actions were impacted by the ruling. Note that Justice Scalia participated in the Dukes case despite the fact that his son works for the law firm representing Wal Mart. However, this is consistent with his coziness, along with that of Judge Thomas, with conservative big money groups and with corporate litigants.

The latest decision of this court struck down Montana's campaign finance law ruling. In another split decision, the court, in a two paragraph ruling and without argument reversed the Montana Supreme Court that upheld that states century-old ban on corporate spending in state elections. In his dissent justice Stephen Breyer wrote" Montana's experience, like considerable experience elsewhere, since the court’s decision in citizens United, cast grave doubt on the court supposition that independent expenditures do not corrupt or appear to do so."

As Montana Atty. Gen. Steve Bullock said afterward: "It is a sad day for our democracy and for those of us who still want to believe that the United States Supreme Court is anything more than another political body." After all, the Montana law had been on the books for 100 years. Its constitutionality had not been called into serious question and it was considered well within established law. The absurd notion of the US Supreme Court that corporations are people and speech is money speaks for itself.

There is little hope that the Affordable Care Act will not be subjected to the same kind of personal political treatment as given to other politically important cases. It has been more than 75 years since the Supreme Court overturned a piece of legislation as significant as the Affordable Care Act. In fact, when the court overturned the NRA in 1935, it was a unanimous decision, not a politically divided one. Overturning the ACA just because the conservative justices don't like it and then add to those Bush vs Gore as well as the decision in Citizens United and you have the Supreme Court that's chosen political sides. One can only conclude that what matters to those Justices are politics,money, party and party loyalty.

Although the Pledge of Allegiance says that this is a nation with liberty and justice for all, this court's history says otherwise. As Jay Bookman has expressed so well,http://blogs.ajc.com/jay-bookman-blog/2012/06/26/a-peek-under-the-robes-of-an-increasingly-partisan-court/?cxntfid=blogs_jay_bookman_blog the truth is corporations wield inordinate power in Congress and in state legislatures. It is hard to tell where government ends and corporate America begins. Freedom of speech is now synonymous with freedom to spend. This court says speech equals money; money equals democracy.

This was not the view of our constitutional founders who favored individual interest over those of big business. It is utter nonsense to think that ordinary citizens or candidates can spend enough to place their views before the voters and keep pace with the unlimited spending capability of corporations who place their corporate views before the electorate. The idea that spending money and election cannot give rise to corruption or the appearance of corruption is nonsense. This is simply smoke and mirrors. In the real world of politics the quid pro quo is loyalty for money. Experience teaches that money corrupts and enough of it corrupts absolutely.

The founders intended a balance of power, a check and balance, not political corruption of the judicial branch that was supposed to be objective and above politics. The Bush/Rove agenda continues to haunt us and, with regard to the U.S. Supreme court, will continue to do so into the indefinite future.