I have to admit I never  thought the outcome of the U.S. Supreme Court on the health care bill  would ever be what  it turned out to be. Nor would I, in a  thousand years, have anticipated the "swing" vote would be Justice Roberts who now suffers the hysterical abuse of  conservatives like the  biopolar conduct of Glen Beck  in reacting to Robert's vote.

So, why did  he do it? I believe he made a very difficult choice to fulfill his role as Chief Justice and  preserve this 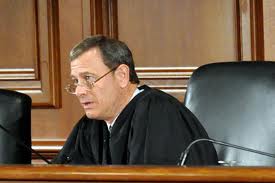 court from classic proof that is is just a partisan group of politically driven judges who are not  above politics. I  think he was well aware  of the eroding public support of the people who see  this court as a bunch of  Republican politicians in black robes. He must have  realized another party line vote on this law would seriously undermine respect for  the court as an institution. I think  he thought it was his duty as Chief Justice  to uphold the reputation of  the court by voting contrary to the gang of four he usually votes with. The decision could not have been easy for him. I'm sure it involved his  political beliefs in total conflict with his duty to preserve the integrity of the court.

Furthermore,it appears he originally jointed the usual gang of partisan justices, Scalia, Alito and Thomas, with Kennedy in the drafting of the dissenting opinion which they thought was going to be the majority  opinion. That version would have found entire law invalid and unconstitutional  -  a total Republican victory. It looks like he changed sides late in the game by the wording of the dissent.It's been correctly noted  that "to  say the  remaining conservative justices are angry is a total understatement."

What should be clearly understood by Robert's decision, is that he has not changed his conservative philosphy and Republican beliefs. This was, I think, solely a tactical decision and not a change of attitudes or  political belief.  Liberals who expect him to be sympathetic in the future will be disappointed. Nevertheless, I guess I owe Roberts a pat on the back  for his courage in upholding the disenegrating reputation of our Supreme Court in this one case. I only hope his perceived duty as Chief Justice to  protect the court as an institution will compel him to make similar decisions  in the future. If not, the reputation of this  court  will continue  to deteriorate.

0 thoughts on “I AM FLOORED BY JUSTICE ROBERT’S VOTE ON THE HEALTH CARE BILL!”