While looking for something on the internet I came across this account which is reported to be entirely true according to the website www.friendshipsofefrat.org/idf-story.php The story involves two Israeli soldiers,  Yoni and Yair. Yoni was an Israeli Defense Force soldier who was stationed in Hebron. One early morning he was shot by an Arab terrorist. It was in a remote area and there was no one around to help him. He passed out while bleeding badly. However, it happened that there was another soldier who happened  to be nearby 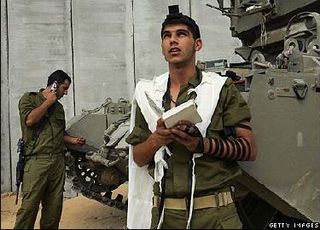 and who heard the shot. He went to investigate. He found Yoni bleeding to death and applied pressure to stop the bleeding while calling on his cell phone for help.

Help arrived and Yoni was taken to a hospital where he had surgery which saved his life.The doctor told his parents that had it not been for the soldier who stopped his bleeding he would have died. Yoni and his parents felt it was a miracle this soldier had happened to be there who managed to locate him as quickly as he did and save his life. They wanted to thank the soldier but he had left the hospital once he heard that the man he helped would survive. No one knew who he was at the hospital and no one could identify him.

After he got out of the hospital, Yoni and his parents called the Army to try to learn the name of the soldier so they could thank him. The Army couldn't help them. But, the parents owned a grocery store so they put up a sign explaining what it happened and asking for help in identifying the mystery soldier who had saved Yoni's life. Nothing turned up for almost a year. Then, one day, a woman read the sign and remembered how happy her son, Yari,  had been when he came home one day and told them how he had saved another soldier's life in Hebron. She told Yoni's parents about it and the two mothers decided to call their sons on cell phones to verify the facts. They learned Yair was the mystery solider. Arrangements were made for the two young men and their parents to meet. At a very emotional gathering Yoni and his parents thanked Yair for saving Yoni's life.

This is when the story took an amazing turn. Afterwords Yair's mother quietly asked Yoni's mother to talk to her outside privately. Out side she asked Yoni's mother if she remembered  her. Yoni's mother said: "No, I'm sorry. Did we meet before?" The other told her they had met and explained when she saw  the sign she just happened to be in the area and had wanted to visit the store. She said twenty years ago she had lived here and often came to the store to buy things. She reminded Yoni's mother that one day she had come to the store and was very distressed. Yoni's mother noticed it and asked what was wrong. She went on to explain that she had confided she was going through a very difficult time and had found she was pregnant. She told her she was planning an abortion.

Yoni's mother called her husband over, the woman related, and the two of them began to console her. She remembered: "You told me it was true that I was going through a hard time but sometimes the good things in life come through difficulty, and the best things come through the biggest difficulties. You  spoke of the joy of being a mother…You both spoke and spoke until I was convinced that I actually should have the baby – so you see God paid you back. I had a boy 20 years ago that you saved by telling me to think twice before doing the abortion. My beloved Yair wouldn't  be alive if it were not for you. He was the one who grew up to save your son Yoni's life."

Someone has said there are no coincidence's in life.It was Albert Einstein who once said:Coincidence is God’s way of remaining anonymous.