Voters in Wisconsin go to the polls today to vote in an important election about worker rights which has ramifications for the rest of the nation. The vote is about the recall of the Wisconsin governor, but it deals more with politics than just union rights.

Scott Walker was elected governor of Wisconsin in a GOP landslide in 2010.The Republicans also gained control of the Wisconsin State Senate and House of Representatives. Walker was able to push through the Republican-controlled Legislature an anti-union bill directed at public sector employees. It sharply limited the collective bargaining rights of nearly all of the states public employees unions except for those for police and firefighters. These two unions support Walker The rest of the unions targeted are those that support Democratic candidates. This was a politically motivated law intended to dry up democratic funding and limit collective bargaining rights at the same time. Under the law unions could no longer represent members in negotiations for better working conditions or for pay raises beyond the increase in inflation. The law curtails the ability of the union to collect dues used for lobbying the legislature and require workers to vote the union back into existence every single year

In response, a massive recall campaign against Walker was instituted. Wealthy Walker backers have poured more than $30 million into his campaign since last year compared with only 3.9 million raised by his opponent in the recall election. Walker's political career has been bankrolled by the notorious and very rich Charles and David Koch who support ultra conservative issues. In addition, the very rich, the very conservative, and the very anti-union wealthy have used their vast fortunes in a war 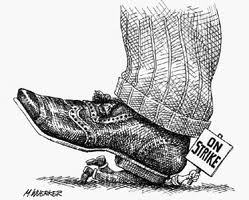 against unions, the Obama initiatives on health care and the environment as well as other conservative causes in Wisconsin as well as across the nation.

The law has significant political implications for the presidential race. A Walker victory could put Wisconsin into play in the November presidential contest. President Obama won Wisconsin by nearly 14% of the votes in 2008. A victory for Walker would impact funding from unions in support of Obama and would require spending resources there. Of course, republican presidential candidate Mitt Romney has strongly backed Walker.Organized labor numbers have been declining for the last 60 years.Today one in eight American workers is a member of the union compared with more than one in three in the 1950s. However public sector union membership rates have held steady and the number of members increased thanks to the growth of government employment. Therefore, public sector unions, which traditionally support democratic causes and candidates, has been targeted.

Union busting has existed for many years both here and in Europe. It dates at least to the 19th century in the United States when a rapid expansion in factories and manufacturing required workers. Conditions were often unsafe and dangerous with women paid lower wages than men and children employed in hard labor for long hours. This resulted in clashes between labor and management. Unions like the industrial workers of the world were destroyed by the Attorney General of the United States conducting raids (The Palmer Raids & Terrorist Violence) in which union members were thrown in prison and were deported from the country. (JOE HILL, THE WOBBLIES AND "IN THE SWEET BY AND BY) For 150 years union organizing efforts and strikes have been opposed by police, private security forces and even the United States Army. (The History of Early Labor organizations in the United States) The Pullman walkout of 1894 and the Colorado labor wars of 1903 are examples of unions destroyed by the deployment of military force. The Pinkerton national Detective agency was primarily a union busting police force where shooting wars between strikers and the Pinkerton agents was not unknown. The federal troops were used to crush the American Railway Union of 1894 during the Pullman strike and Henry Ford's war against Ford workers are only two of many examples of violence used to break unions.

As a result laws were adopted with the intent of protecting the right of creating unions and union membership.The year I was born, 1935, Congress passed Robert Wagner's National Labour Relations act. It limited employer's ability to interfere in the formation of labor unions as well as their conduct towards labor unions. It outlaws discrimination against employees who join unions or want to form unions and forbids employers from retaliating against employees. But,in 1947 that Taft Hartley act was passed under a new Republican administration. It banned the closed shop which required employees in a union work place to join the union and supported state laws prohibiting collection of union dues through employers and outlawed secondary strikes. While attempts have been made to amend the act it is still in effect today. In addition, even the exsting weakened laws have not been aggressively enforced.The failure of the US labor laws to protect American workers from union busting activities has been documented. Unions and workers can't count on the federal labor agencies protecting them. Employers illegally fire Pro union workers in connection with organizing campaigns and fired workers discover obstacles and attempting to reclaim their jobs. The National Labor Relations Board is in need of reform to protect American workers and their rights to form unions.

Given the amounts of money poured into the Wisconsin election by the wealthy PAC's and conservatives it is predicted the recall will be unsuccessful. It's a sad day in America when the super rich have gained control. The workers of the world deserve better.