On Monday October 1st, the feast day of St Theresa, one of the best known saints, we arrive in Venice. The sky is black as we enter the harbor and there is a light rain. By the time we dock there is some blue trying to make it's way through, but it is cool outside. Now for the hard work of packing. We spend the night here and leave the 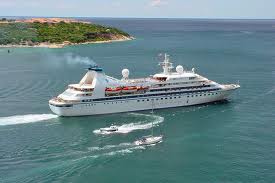 ship in the morning so today we have to pack. We caught the  ferry that circles the canal to go to St Mark's Square. It is jammed with people standing. All want to be in the open area to take photos instead of inside. It is a 20 minute trip to St Mark's square where Lita wants to turn in her vat tax forms.

The area is crowded again this morning so I decide to sit at an outdoor cafe near the square waiting. A small bottle of water and expresso here runs 17 Euros  or roughly $22 and if the band were playing they would add another 10 Euros, but it is a convenient place to wait and watch the passing parade. The weather runs  from overcast to passing  sun. In front of me a man with a camera stops people to photo them with the pigeons. He feeds them to keep them around and gives the person some feed to hold which causes them to land on the person while he takes the photo for an unknown fee. All I know is that these pigeons represent "flying rodents" to me and I wouldn't want them landing  on me.

Lita comes back frustrated. Previously, when she tried to turn the forms, two different government offices said their computer wasn't working. This time, after waiting in line, they took the forms, gave her a refund, after running her credit card and told her she now had to stop at the airport to turn in the forms or she would be charged an extra fee. Later, at the airport, a helpful Italian warned her that there  were five mailboxes intended for purchases in different areas and if she put the envelope in the wrong one, it would be discarded. Of course, none of this is made clear in the hopes of avoiding  having to refund the vat tax.

After dealing with the forms, we caught the Hotel Chipriani water taxi at the square to the hotel across the canal for lunch. We've stayed at this hotel more than once and it is a very beautiful hotel. What is striking is how quiet it is here after all the noise and fuss of St. Marks so crowded with tourists. We had a very nice lunch and then took a water taxi back to the boat. Water taxis are expensive - 60  Euros by the way, or about $78 dollars. This trip usually runs 70 to 80 Euros or $91 to $104 U.S. Venice is expensive. Back at the ship we finish packing since the suitcases have to be outside the door by 11:00 pm. We ate on the ship and went to bed.

The next morning we had to be out of the room by 8:00 am so we had breakfast and waited for our car in the ship lounge until it arrived at 9:00 am to take us to the airport. The driver is a nice 25 year old man who speaks good English. He arranges a porter for our bags and we go to the BA counter only to be told they won't accept bags for an hour. So we have to stand waiting with our bags and then drag them to the counter when it opens.

We have a close connection in London for our next flight which requires clearing customs and security plus riding a train. If our flight is late or we have a problem we will miss this connection and have to spend the night at the hotel located in Heathrow itself. Fortunately, we land on time and have a  fast lane for customs plus security. While I am stopped, as always, for my knees and hip, we clear  security without difficulty and arrive at our departure gate with time to spare. The flight to the U.S. is comfortable, if long – about 9 hours and we arrived at SeaTac about 5:30 pm Tuesday – the same day we left London since we gain time.

Today, Friday, we still are suffering from jet lag which means waking up at 2:00 or 3:00 am and finally getting up, because we can't sleep, around 4:30. By mid afternoon we are exhausted. We are told that while we were gone the weather has been sunny and warm. As we look out from the Gig Harbor house at Covos Pass and Vashon we have serious questions about why we leave. We are glad to be home.