Today, January 24th, is the annversary of the death of a great coach and mentor to me, William Taylor. I've published a full account of my high school relationship to this great coach and his profound influence in my life: https://paulluverajournalonline.com/weblog/2012/01/william-taylor-1922-2002-coach-and-mentor.html

Many of us can point to one person or perhaps several people who played significant roles in our life. People who made the difference at a tipping point in our lives. Someone whose words or actions changed our attitude and the direction of our life for the better. For me, after my parents, it is a 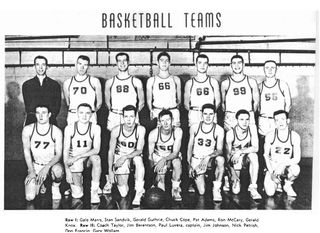 short list of those who had a very significant influence on my life. It includes a third grade teacher, a high school basketball coach, a Catholic priest and several trial lawyers. The third grade teacher, Mrs. Marshall, always saw the good in me even in the face of considerable evidence to the contrary. Fr. William Dooley was the chaplin at the the Newman Center at the University of Washington in 1953 when I started college. His spiritual guidance during a time of some confusion was very instrumental in the direction my life took.

But, one person played a truly pivotal role at a critical time in my life:, my high school basketball coach Bill Taylor. For whatever reason, he took an interest in me and encouraged me to believe I could be a basketball player. He then became my example of what a decent person and leader should act like when I was in the 8th grade.

William H. Taylor was born March 11, 1922. He died January 24, 2002 in Anacortes, Washington at 79 years of age. He was a great natural athlete who played baseball and basketball for the University of Washington He graduated from the University of Washington in 1949. He flew fighters in the Navy and eventually became my high school basketball and baseball coach in Anacortes. The town had always been a basketball town very much like the one portrayed in the movie Hoosiers about a high school team in Indiana and the town's devotion to basketball.

When I was in the 7th and 8th grade I wanted to play basketball for Anacortes. I attended all the games and my hero's were Anacortes basketball players. I wasn't very good at basketball, my grades were poor and I was getting into trouble in a lot of ways. I don't know if my dad put him up to it or not, but when I was in the 8th grade Bill made it a point to find me and tell me he thought I had potential as a basketball player, even though I was on the bench my 7th and 8th grade years. He said I needed to practice and especially bring my grades up. He took me to the gym and showed me what shots he wanted me to work on. He told me to shoot 25 times every day from the positions he gave me on the floor.

I had dad install a hoop at home and practiced even after dark with the garage lights on. I was very determined to become the player Taylor said I could become. All summer and kept it up. He encouraged me, gave me a purpose and got me going in a different direction.

I did make the high school team. My jersey number was eighty eight because that was the jersey number of one of my hero's Jack Symonds, who later died in an airplane crash in Alaska.I was captain my senior year plus led the scoring for the team which wasn't one of Bill's best teams.

However, making the team wasn't the most significant change Bill was responsible for. He was also was an adviser to the high school Key Club organized under the Kiwanis club. It was intended to teach leadership and community responsibility. Bill got me involved in Key Club. One year he took me and others to the 1952 Pacific Northwest District Convention in Auburn, Washington. As club representative, I gave a talk at the convention and before the convention was over I had somehow been elected the Regional Key Club Governor. This was the first time a Governor had been elected from our district and the first from Anacortes.

It was so unexpected that I had to borrow a sports coat from the father of the host family I was staying with. By coincidence his son, Norman Roberts and I ended up in the same class at Gonzaga Law School. In fact, it wasn't until a young woman at Anacortes was elected in 2002 that another Governor was elected from our district so this was a big deal for me thanks to Bill Taylor.

I went to the 9th annual convention of Key Club International in Chicago, held at the Conrad Hilton Hotel in June of 1952 where I gave a talk to the huge crowd.

The position of Governor required me to give speeches around the state at service clubs, key clubs and different organizations. Bill helped me develop a speaking skill and encouraged me. We held the first ever Pacific Northwest District Convention in Anacortes which I chaired with Bill's guidance and continued encouragement. As a result of my election I was required to give talks to Key Clubs and groups in the area. I developed confidence in speaking and an enjoyment of being in front of an audience.

My senior year I was elected student body president of my high school and commencement speaker at graduation thanks to Bill Taylor's influence on me. All of this because Bill Taylor took the time to encourage me. I am convinced that as a result of this experience I decided to attend law school. This was all due to Bill Taylor taking an interest in me and his encouragement.

Lita and I are proud of having created the William H. Taylor Scholarship fund with the Anacortes Noon Kiwanis Club for Anacortes high school students. Students exhibiting leadership, scholarship and involvement in student as well as community affairs are given college scholarship awards. My life story is one of an encounter with man of high principle who encouraged me in the right direction at a significant time in my life resulting in my life turning in the right direction at a critical time. This is in honor of William H. Taylor, great coach, mentor to me and many other young men and a man of great character.