Pope Benedict gave his two weeks notice. He going to resign. The first pope to do so in some six hundred years. I admit I was never a fan of the present pope and even less of the previous one. In fact, the only pope in my life time I thought was extraordinary and who should be declared a saint was John 23rd.

In my view, Benedict and his predecessor John Paul II were arch conservatives who caused much pain 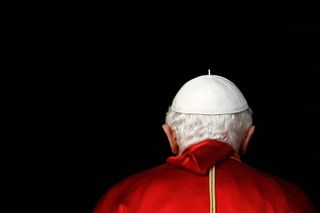 and damage to the Church, clergy and people by their strict traditionalist views. Benedict was John Paul's "enforcer" before he became pope who punished, silenced and otherwise used a heavy fist in  his role under John Paul. After he was elected pope  he continued with the same kinds of conduct moving even further back to pre Vatican II views.

John Paul was the second longest serving pope in history who I am convinced  should have resigned many years before his death because of his increasing incompetence to fulfill his duties as pope due to failing health and because  of the harm he was doing as pope. It was under his

leadership the Church was experiencing the sex abuse scandals of  priests.

Benedict leaves a legacy which includes the priest sex abuse scandal under his watch and the Vatican bank scandal as well a church at the crossroads in many ways. The next pope could have great significance in addressing the serious problems the church faces today. However, the reality is that Benedict has appointed 67 cardinals of the 117 cardinals. Like George Bush's appointment of conservative lawyers to the judiciary, John Paul and Benedict have done the same with their appointment of cardinals. The result is a packed house of conservative cardinals with some exceptions. I regret the odds  are the  new pope will be of the same mindset as present pope whose goal appears to have been to drag the church back to the traditions before Vatican II. I predict more of the same with the new pope and that is a tragic thing to anticipate.

So, who was  the last pope to resign? It was Pope Celestine  V  in 1294. He was an interesting man. He became a Benedictine monk at age 20. The Benedictine order was a strict order of poverty and prayer. But, he wanted the life of a hermit so he left, with permission, and went to the mountain area to live in caves where he spent five years in solitude and prayer. When it was time to elect a new pope there was discord among the cardinals and as a compromise they decided to pick someone known for their sanctity and outside the "political" circle" of possible candidates. They elected Celestine, but when they  found him to tell him about his election, he firmly refused to accept. Under enormous pressure, he finally agreed. However, only five months later, he wrote a a papal decree giving the pope the right to resign and then exercised that right by resigning.

He returned to being a hermit but, two years later, his successor, Boniface,feared a  possible schism and worried it might result in Celestine serving as an example or being used to cause upheaval. The pope made a search for Celestine, found him in the mountains and imprisoned him in a castle where he remained until he died at 81 years old. Not too nice of Boniface.