There is a Washington State history site, www.historylink.org which is a wonderful source  of interesting stories of history. One of articles is about talks by the famous William Jennings Bryan in Seattle. http://www.historylink.org/index.cfm?DisplayPage=output.cfm&file_id=8663  So, who was Bryan?

William Jennings Bryan was a prominent American politician from the 1890's until his death in 1925. This is a man who ran three times, unsuccessfully, as the Democratic candidate for presidency of the United States and who prosecuted John Scopes in the famous "Scopes trial of the century."  See: https://paulluverajournalonline.com/weblog/2006/11/eighty_one_year.html

With his deep commanding voice and skills at oratory he was the best known lecturer of his era. In 1896 when he ran for president he gave over 500 speaches at a time when presidential candidates stayed home and let others promote them. Because of his emphasis in his speeches on what he saw as the wisdom of  the common person he was known as the "great commoner."

Bryan delivered speeches around country to endorse the free use of silver for coins  at a ratio of silver to gold 16  to 1. This would have helped cash poor people, especially farmers. He became famous for this speech when he gave an rousing talk in support of the idea at the 1896  Democratic convention when he was thirty six years old. His dramatic speaking style and the words he used roused the crowd to a frenzy. When he concluded, men and women screamed, threw their hats and coats in the air and applauded. As a result of this speech he was nominated to run for president.

For years after, he repeated the speech across the country. In a typical day he would give four speeches, each an hour long. In Wisconsin he once made 12 speeches  in 15 hours. http://en.wikipedia.org/wiki/William_Jennings_Bryan  His talk in favor of silver over gold became known as the "Cross of gold speech" because of the famous lines with which he concluded  the speech:

"Having behind us the commercial interests and the laboring interests and all the toiling masses, we shall answer their demand for gold standard by saying to them: You shall not press down upon the brow of labor this crown of thorns. You shall  not crucify mankind upon a cross of gold."

After unsuccessfully running for office, Bryan needed money. With his powerful voice and skill at oratory he became a celebrity on the Chautauqua circuit (see:https://paulluverajournalonline.com/weblog/2009/08/the-chautauqua-william-jennings-bryan-in-anacortes-wa.html) giving talks in hundreds of towns across the country and receiving $500 a talk and a percentage of the profits.

So, what was this nationally famous man doing in Washington state? The Alaska-Yukon-Pacific Exposition in Seattle celebrated a William Jennings Bryan day on October 12, 1909. He came to Seattle 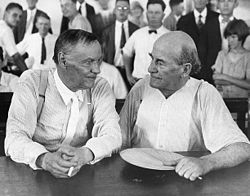 and gave speeches. Huge crowds came to see and hear him. In the morning he spoke to Broadway High school students. He then gave a speech to the faculty of the University of Washington delivered at the New York State Building at the Exposition. That afternoon he gave a speech at the amphitheater. Later he gave a talk to University of Washington students. That evening he gave another speech at the amphitheater. It was a huge event for Seattle.

Bryan worked for prohibition and was an advocate for banning the teaching of evolution in schools. When a high school teacher in Dayton Tennessee was charged with the crime of teaching evolution in 1925, Bryan agreed to prosecute the case which was defended by Clarence Darrow. The high point of the trial was the cross examination of Bryan by Darrow about the contents of the Bible. Darrow managed to get Bryan to give answers that were embarrassing enough for the biased judge to stop the cross examination and strike the entire cross examination. The next day the national press announced that Clarence Darrow had
exposed Bryan's "mindless" belief in Biblical scripture. But many people
called Darrow's inquisition "a thing of immense cruelty."

After the trial, Bryan continued to travel hundreds of miles giving speeches in a few short days. On Sunday July 26, 1925 he returned from a church service, ate a meal and died during nap afterwards – just five days after the end of the trial. When Bryan died five days after the Scopes trial ended, some even accused Darrow of murder. He countered that Bryan had died of "a busted belly." (Bryan had an enormous appetite)