My father in law, Hollis Barnett died on March 22nd 1990. He was a unique and wonderful man. You canread about his extraordinary wife Betty Barnett and more about this couple who
I grew to love. https://paulluverajournalonline.com/weblog/2010/03/i-write-this-in-memory-of-my-wifes-father-hollis-hall-barnett-whodied-in-puyallup-washington-on-march-22-1990-at-the-a.html 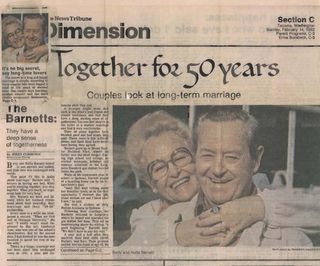 National Park where his father, Herman "Herm" Burke Barnett, was a ranger.

Hollis had grown up in the park where his father, Herm, worked. Hollis worked as a temporary ranger in thepark while growing up. After high school he went to Spokane to attend Gonzaga
University. Hollis and Betty met when she as a senior at Holy Names High School in Spokane and he was at Gonzaga University. Hollis was staying in a boarding house run by Betty’s aunt and they met and married November 16, 1931 in Seattle where he had found work operating a gas station to support them. Then, in 1937, Hollis was offered the operation of a small gas station located at Longmire inside Mount Rainier National Park.

While working at the gas station in 1937 Hollis learned that land owned by the Park Commissioner Edward Hall was for sale. He decided to buy property located right at the entrance to the park as
an ideal location for a gas station and restaurant. The result was the first Gateway  Inn. They lived in a small room in the back and the log cabins were added later to rent to travelers. Their son Devitt was born in 1933, followed by young Hollis in 1939 and then Barbara in 1940. With a growing family began to build a small house next to the restaurant in 1941. Monica was born in 1943 and Lita in
1950. This was a family run resort that served food, sold gas and provided small log cabins for overnight guests. They also rented ski equipment and had a small store inside as well. Everyone in the family worked at the resort.

Later A major flood destroyed the cabins and they had to be replaced in the late 1960's. After many years of working long hours at Gateway Hollis and Betty sold the business and retired to Puyallup where they enjoyed reading and traveling. They had spent their whole married life

Hollis had the ability to "talk to the animals." Not only animals, but ravens and birds would come out of the woods and fly from trees to come to him. He would talk to them in the noises they instinctively made. It probably also helped that he always had food in his ockets for them.  Herds of deer roamed the property and most of them Hollis had named. During hunting season he would grab the males and saw off their antlers to look like a doe instead of a buck ith a rack of horns. He would also attach red hats to his favorites so hunters ouldn’t shoot them.

Hollis was very entertaining because he knew so many poems and limericks by heart. He would
recite them all the way from Mt. Rainier to Tacoma and back. He knew almost all
the Robert Service Poems as well as classic English and American poetry. Lita,
my wife's personal favorite as a child was a poem called " Sugar Tooth Dick" that he could recite. See https://paulluverajournalonline.com/weblog/2011/12/sugar-toothed-dick.html for the poem.

When I think of Lita's dad I think of him with a twinkle in his eyes. They would literally crinkle up and get a smile when he was about tell a joke and he had hundreds of jokes he loved to tell. He had you ready to laugh before he even told the story or joke and he was a wonderful story teller. He had a wonderful sense of humor and was fun to be with. When Betty died Hollis was devastated
and really never recovered from losing her. She was a very special woman and so was he. I miss them both and wish I could be half the decent and good human being Hollis Hall Barnett was during his life.