The Citigroup Center is a skyscraper located on Lexington Avenue in New York City. It is one of the ten tallest skyscrapers in New York City. Standing 59 fours high is 915 feet into the sky. The structural engineer was William LeMessuirier (pronounced "La Measure"). 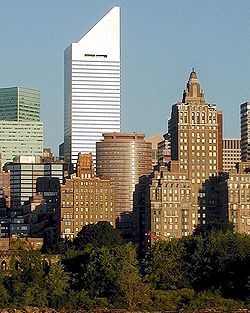 the center of each side rather than the corners. This unique design was required because it had to be built around a church. St Peter's church had allowed the company to demolish the existing church and build the skyscraper under one condition: that a new church would have to be built on the same corner with no connection to the building and no columns passing through the church. That required a innovative design. LeMessuirier was the man who was responsible for the structural integrity of the design that was proposed.

The building was a great success and greatly admired. Then, in 1978 a woman engineering student contacted the engineer for some technical information about the design for a study she was making as a student. She explained that her professor had expressed doubts about the strength of a stilted skyscraper without support columns on the corners. The engineer provided the information and wrote her to "tell your teacher he doesn't know what the hell he's talking about." However, he later decided to re-examine the situation. H was aware of the fact his original specifications called for welding joints in the building and that the owners had decided to use bolts in order to save money. That,however was not uncommon as it usually made no real difference. But,as he re-examined the mathamatics and wind forces, he became greatly concerned about winds not coming directly at the building, but rather from an angle. His figures indicated that if that occurred there might be enough force to break the bolts holding the joints resulting in structural failure.

He asked another engineer go over all of the calculations. The man he consulted, Alan Davenport, reported that he found a 70 mile per hour gust would be sufficient to break the bolts. They also calculated that if that occurred, the entire structure could fall and if it fell it would hit other nearby buildings causing a domino damage effect. The hurricane season was approaching New York and these  two engineers were the only two people in the world who were aware this $175 million tower and its occupants were in potential danger.

LeMessuirier realized he faced litigation, bankruptcy and professional disgrace. Hwever. he also realized he had an obligation to protect people and other skyscrapers from possible disaster. The next day he began calling people including the executive officers of the Corporation. He explained all of the facts and recommended that the solution of welding all of the joints be undertaken immediately. It was be very expensive and would take time.

The owners agreed and welders were hired in great numbers to work all night, every night welding the joints. The Red Cross was notified and evacuation plans developed. The City was notified, but no public announcement was made to avoid panic. In the meantime Hurricane Ella was forming and moving towards New York. Ella arrived about the time when work was only half done. It would have been a disaster, but Ella instead veered out to sea and never hit New York.

The reinforcement work was completed in 1978 before there were any major winds.  The evaluation after repair was that it was now one of the safest buildings in the city. Nevertheless, the public was never told about it until New Yorker magazine published an article in 1995, twenty years later.

LeMeswsuirier paid his $2 milliion insurance policy to the owners and they forgave the rest of the $8 million spent on repairs. Probably because of his honesty and his ability to to provide a solution to the problem Honesty is the best policy.