Tom Donohue is the 74 year old president and CEO of the United States Chamber of Commerce, a position he has held since 1997. Thanks to his efforts the Chamber has been able to spend $136 Million dollars on lobbying Congress for laws favorable to big business. Of course, he enjoys the perks of his position. He travels around Washington DC in a chauffeured limousine and flies around the globe in a private 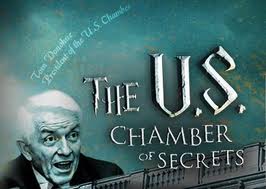 jet. With a pay check of $5 million dollars ($4.9 million in 2011) he is the second highest paid trade association leader in Washington DC. Donohue  says the Chamber needs $5 Million dollars a month to operate and it is a $250 Million dollar a year operation. It includes 500 employees and a small army of political lobbyists

He is responsible for plunging the Chamber into politics. In 2012 he led the unsuccessful effort by the Chamber, through spending of millions of dollars, trying to elect Republicans to Congress. The Chamber claims that as a national organization it is made up of some 3 million businesssess. In fact,it's financing is from a small handful  of large multinational corporations whose selfish businesss interests it represents. One website has pointed out:

“Although the Chamber has misrepresented itself and claimed to represent 3 million businesses (later modified to 300,000 after a Mother Jones exposé), in reality it actually represents a small group of multinational corporations. In 2008, half of its donations came from just 45 corporate donors. In 2009, nearly half of the Chamber’s money came from a single donation from the health insurance industry trade association. Moreover, the Chamber doesn’t appear to truly care about jobs or small businesses — evidenced by the fact that the Chamber killed legislation to create millions of new clean energy jobs and expand America’s competitive advantage in clean energy technology.”http://thinkprogress.org/economy/2010/11/23/131597/uschamber-obama/

There is a website "The U.S. Chamber of Commerce doesn't speak for me" http://chamber.350.org/ that has pointed out:

The Chamber leads all organizations in the amount they spend on political ads but have been able to keep their actual donors secret thanks to our Supreme Court and our laws. In fact, the Chamber spent some $33 Million during the 2010 mid term elections on Republican candidates while  insistingitis a "non-partisan  advocate for small businesses.

While maintaining it is the representive of many thousands of small businessess, the New York Times reported in October 2010 that half of the Chamber's $140 million in contributions in 2008 came from just 45 big-money donors, many of whom enlisted the Chamber's help to fight political and public opinion battles on their behalf (such as opposing financial or healthcare reforms, or other regulations). According to sourcewatch,http://www.sourcewatch.org/index.php/SourceWatch,the Chamber is "dominated by oil companies, pharmaceutical giants, automakers and other polluting industries."

Needless to say Donohue is the leader of all the corporate giants in attacking plaintiff trial lawyers who sue these corporations and expose their wrong doing. Using  millions from it's secret corporate donors the Chamber runs ads  attacking the jury system and trial lawyers. But, more recently they have also spent  their  millions on trying to elect judges  who favor business and corporate interests. For example, companies  like Wal-MartStores  Inc,  Home Depot Inc and other huge corporations  have donated $1 Million each in  targeting judicial elections. Over $5 million dollars was spent by the Chamber in Michigan, Midsissippi,Ohio, Indiana and Alabama  to try to influence the election of  judges donated by corporations.

Under Donohue, the Chamber has become a Republican  front for a small group of large corporations whose goal is the elimination of our trial by jury justice system and the election of  "business favoring" judges along  with Republican  legislators.