Unless you are as old as I am I'll bet you've never heard of "Wrong Way, Corrigan." About 76 years ago, on July 17, 1938 at 5:15 AM a 31 year old pilot, Douglas Corrigan, climbed into the cockpit of his airplane and flew from Brooklyn New York for Los Angeles. At least  he had reported before leaving that Los Angeles was his destination that morning. Instead a little after takeoff the plane turned sharply over the Atlantic ocean and disappeared into a cloud bank,the opposite direction of where he was supposed to be going. 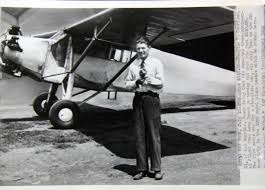 Some 28 hours later Corrigan landed his  plane at an airfield outside of Dublin Ireland. He told the people who gathered around his airplane: "I just flew from New York. Where am I?  I intended to fly to California" It created a sensation as he had crossed the Atlantic alone in a single engine airplane.

The truth was that  he had flown from California to Brooklyn  a week before leaving that morning. That was a flying record at the time. He decided to try to fly across the Atlantic in the wake of Charles Lindbergh's 1927 flight. He applied for permission with civil aviation authorities to make the trip to Ireland. They were quick to say no. His airplane was almost homemade, its engine put together from 2 other engines. He had added 5 fuel tanks which blocked his view out the front of the cockpit so he had to open the door, held with bailing wire, in order to see out the side where he was going.

Before he had taken off he had made sure to show his charts for flying across the country, not the ocean and had only a couple of chocolate bars,  some cookies and a quart of water.  The civilian authorities imposed a suspension of his license in spite of his excuse, but they set it to end about the time he arrived  by ship back in the United States,'

Newspaper reporters quickly nicknamed him  "Wrong Way, Corrigan"  and he was a national hero with a tickertape parade upon returning to the U.S. Later he worked as a test pilot and  then owned an orange 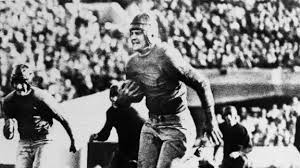 grove near Los Angeles. Corrigan always insisted that he had simply  made a mistake  because his compass had jammed and because of the fog  which had confused him. Nobody  really thought that's what happened.

We also have the case of Roy "wrong way "Riegle.  Riegle was an All-American football player and captain of the football team for the University of California. In the January 1, 1929 Rose Bowl game the Golden Bears faced Georgia Tech at the Rose Bowl in Pasadena. Midway through the 2nd quarter  Riegle's, who played center, picked up a fumble  just 30 yards away from Georgia Tech's  end zone.  Somehow  he  got turned around and begin to run in the wrong direction towards  California's goal. The Bears quarterback  Benny Lom, chased after him, screaming at him to stop. Lom finally caught up with Riegle's at California's 3 yard line and tried to turn him around  but was hit by a wave of Tech players.  He was brought down at  the California 1 yard line. The Bears  punted the ball but Georgia Tech blocked the punt and ran it in for a safety giving them the lead.  However, in the 2nd half Riegles  played an outstanding game and  the Bears won 8-7. Riegle's  ability  to come out in the 2nd half after such a disastrous event  has been cited  as an illustration about overcoming setbacks  and right attitudes.

That's the story of two wrong way men who were famous in history.