The concept of "conscious evolution" generally holds that mankind is transforming through the integration of science, spirituality and technology. A famous French Jesuit priest, Pierre Teilhard de Chardin (1881-1955) was a paleontologist and geologist who was involved in the discovery of the "Peking Man," a Chinese skull believed to be evidence of the evolution of man. De Chardin was a man of science who became a philosopher in looking for the compatibility between science and religion. As he studied 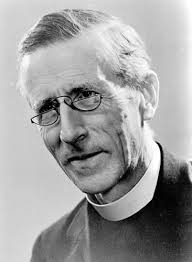 the science of the earth and living species he conceived the idea of an "Omega Point" which he saw as ultimate peak of evolution towards which he believed the universe was  evolving. He saw the universe and  mankind itself still evolving in complexity and consciousness along with the universe. "Conscious evolution" was the term he applied to this concept.

His two books The Phenomenon of Man and The Divine Milieu outlined his views. He saw the Jesuit motto of  "finding God in all things" was fulfilled in the universe and in mankind. He saw the evolution of matter to humanity as an ultimate reunion with Christ. Consistent with the views of St Augustine he abandoned literal interpretations of creation in Genesis in favor of the writings as allegorical.

As  might be expected, this got him into hot water with his Jesuit superiors and the Vatican. In the early 1920's his superiors barred him publishing and then from teaching. The exiled him to China.  Most of  his works weren't published until after his death. In 1962 the Vatican issued a formal warning about the dangers in De Chardin's writings and teachings. In spte of this, his views on faith and science continued to be studied and even became more well known.

The back story is that Joseph Ratzinger was once a liberal theologian who later became ultra conservative. Before he was named by Pope John Paul to head the powerful Congregation for The Doctrine of the Faith and as a young theologian he had praised De Chardin great vision of the cosmos. But, he began to see Vatican II as a threat to the Church and became a conservative who rejected ideas like De Chardin's. He punished and silenced thelogians who did not conform to tranditional pre Vatican II ideas. John Paul died in 2005 & Ratzinger became Pope Benedict. Benedict appointed Cardinal Gerhard Mueller to the post he had held in the Holy Office. Mueller was a conservative just like Benedict and reflected  his conservative viewpoint on religious issues. Mueller heads the Leadership Conference of Women Religious and is responsible for the controversial "study" of American religious sisters.. He has warned American Nuns not to pursue the "dangerous ideas" of De Chardin as opposed to Christian revelation. One wonders if Pope Francis, himself a Jesuit, will continue Muller in this role or replace him  as he has other people named by Benedict in Vatican roles. Francis has been quoted saying "Teilhard-sounding" concepts and there is speculation he may cite De Chardin in an encyclical on the environment he is currently writing.

Certainly the conflict between teachers of religion and scientist is not new. The famous Scopes Trial in Dayton,Tennessee that took place in 1925 is only a relatively modern example of conflict regarding the literal interpretation of the Bible and the concept of evolution taught by science. The Catholic Church's period of Inquisition extended from the 12th century into the mid 19th century and often involved conflicts between science and religion. Certainly the 1633 trial of Galileo is one of the most famous. Galileo, with his studies through a telescope, had proved that the earth revolved around the sun and not, as taught by the Church, the other way around. In the Catholic world at that time, the earth was seen as the center of the Universe as consistent with Biblical interpretation. He was forced to recant and put under life long house arrest. It wasn't until 350 years after his death the Vatican formally acknowledged he had been right and apologized.

The most common issue of dispute involves Darwinian evolution concepts  and Christian literal interpretation of the Book of Genesis about the creation of  the world. But, there is more to the conflict than creation vs evolution. There is the idea of some scientists and others that everything can be explained and "fixed" by science with religious ideas a total myth invented by mankind who lacked scientific evidence. There is the idea of some Christians that science is  an godless attempt by egoistical scholars to replace God with their teachings. For the fundamentalist Christians, like William Jennings Bryan in the Scopes trial, all one needs to know is in the Bible  which, by faith, explains everything. For the skeptic of this approach, like Clarence Darrow in the  Scopes trial, literal reading of the Bible conflicts  with overwhelming scientific evidence.

In spite of the centuries of controversy over these issues the views of Fr. Pierre Teilhard de Chardin deserve the study of competent and objective theologians. I am a fan of de Chardin who once wrote:

"Someday, after mastering the winds, the waves, the tides and gravity, we shall harness for God the energies of love, and then, for a second time in the history of the world, man will have discovered fire."

My own view is that the God who created this universe did so with perfection and balance. Man's inferior intellectual ability to discover and grasp this amazing fact results in faulty conclusions. I believe there is total consistency in the science of the universe and the religious concepts. I don't have a problem with Biblical writings about creation and evolution evidence. What science has never explained is Aquina's "first mover" proof  of God. We can have a big bang as the start of the universe but science has never explained to my satisfaction how the matter first came into existence. The order of this universe from the smallest known thing to the largest heavenly body convince me there exists a higher power responsible.