Have you thought about how your old ways of thinking and acting can take over your life and without knowing it, you are controlled by your deep seated attitudes and habits? Too often, it seems to me, we don't take the time to stop and reflect on who we are and the lives of doing the same thing in the same way when it would be healthy to change. One of my favorite illustrations of this is in a book Herbert Fernsterheim wrote: Don't Say yes when You Want to Say No. He describes people who mindlessly follow old habits to their disadvantage as having "interfering habits." The example he gives is what he called the 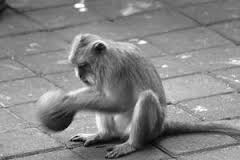 That can be us without our realizing it.

In the same book the author talks about what he describes as "value rigidity." We allow our opinionated ideas, opinions and values to work against our own best interests. We insist on our views and our ideas being so right that we reject being willing to examine other possibilities.

Fernsterheim uses a is a study of south India monkeys to illustrate this idea. He says the natives constructed a trap for  the monkeys  which consisted of a hollowed out coconut which was tied  to a stake driven in the ground or tied to a tree. Something the monkeys loved to eat was used as bait. The bait was put inside through an opening they made in the coconut. The size of the hole was designed to allow the monkeys to be able to reach inside, but was not large enough to withdraw it when they made a fist holding bait. The monkeys would find the baited coconuts. They would reach through the opening and grab the bait inside. When they tried to pull it out they could not because the opening wasn't big enough. They could get their hands out only if they let loose of the bait. However, the natives had learned that the monkeys were unwilling to release the bait. They had found they even when they approached the monkey to capture it, the monkey would refuse to let lose of the bait and would be captured.

A psychology professor from Montana wrote a book in which he said:

Isn't often true of us? We are are unable or unwilling to "go with the flow" of events in our life. We have plans and we have goals. Yet, much of our lives are subject to chance, coincidence and God's providence.  We become frustrated and upset when fate interferes. There is the Yiddish  proverb "Man plans and God laughs." We must plan and we should set goals, but we must also learn to deal with frustration by adjusting and moving on. There is a benefit to listening to our intuition. We should learn the merry go round does have a motor and we should stop pushing it. Instead, we should get on and ride.