Last weekend my Gonzaga Law School class reunion took place in Spokane on Friday and Saturday. I was there on Friday and pleased to see class mates Gene  Annis, Joe  Gagliardi, Phil  Raekes and Pat Sullivan there. Fred Frohmader, Dennis smith, Bob Kovacevich and Richard Guy, the other  surviving members of the class  were not there on Friday when I attended. Lita and I had to return on Saturday so I  missed seeing anyone else that weekend. What's significant is that out of twenty two people who graduated  in 1959 I counted only ten of us still living. Here's our class. We took  the three day bar examination that Fall and became lawyers. Here was our class:  Annis, Eugene, *Ewing, Robert, Frohmader, Frederick O., Gagliardi, Joseph, Guy, Richard, Kovacevich, Robert,*Levitch, Harry, Luvera, Paul, McCormick, Jeremiah, *Montedccuo, Joseph, *Nordale, James, *Parry, Edward, *Perlman, Robert, Raekes, Phillip, *Roberts, Norman, *Rovai, Robert, *Ryan, Laurence, *Sheeran, Patrick, Smith, Dennis (Larry), Sullivan, Patrick, *Swanson, Arthur, *Tollefson, Erling L.,

Pictured below are the following class members: 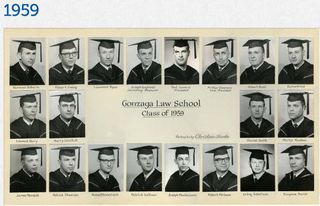 We attended "back in the days" when there was only one night law school in the state and that was at Gonzaga. Law school was four years long, instead of the normal three, because we attended school from 7  pm  to 10 pm each night. All of  us had jobs during the day and most of us were married with children while going to school. I worked  for a lawyer Clare Turner during the day and was married with two children during law school. The law school had a few full time teachers and a wonderful Dean, Smithmore Myers  but the majority of classes were taught by part time teachers who were Spokane lawyers and had a law practice during the day.

The good Jesuits at Gonzaga had liberal  admission standards for the law school to get in, but strict academic standards. As a result, there  were large groups of freshman who started classes. This number began to dwindle as tests were given and grades administered. By the end of the first year the number of students left had been cut dramatically and people continued  to drop out  after the first year until the final graduating class was about our class size.

The emphasis was on "how to do it" rather than history, background and principles. The text books were "horn books" with principles or rules in bold with discussion following. Case books were a collection of cases from which the professor taught rules. These were greatly supplemented with Washington court cases for Washington rules.

The classes were small enough you would count on being called on in every class. The majority of professors required you to  stand whenever you talked since that was required in court. You learned to talk on your feet. Since the emphasis was practical application you also learned the names  of Washington court cases that represented our state's rules. All of our  state laws or statutes, Revised Code of Washington, or RCW, were in only four or five letter size binders. Not the multiple volumes of laws  nor were there volumes of State Regulations which we have today.

We didn't have to worry about studying uniform jury instructions since there were none and each judge drafted their own hand made for each jury trial. Both sides proposed the most argumentative and  slanted instructions they could dream up and the judge took it from there. There wasn't much to learn about discovery because WA followed code pleading practice. There were  no interrogatories and depositions were rare. Most trials featured surprise witnesses since disclosure rules didn't exist and  discovery was very limited. There were no time limits on jury selection and jury trials lasted only a few days on average. People came to watch trials for the  entertainment  of it  and lawyers were expected to quote literature, poetry  and speak with eloquence. There  were perhaps 3500 lawyers in the whole state and you knew many of them personally. The changes over the years have been enormous.

It's  been a great a great 55 year ride in this profession and I was blessed to find my way into the trial work representing people who had been  wronged rather than defending insurance companies and corporations. It was a period of my life that was mostly pleasure and a class of lawyers  who graduated with me who were and are outstanding.