This Thursday, May 14,  we leave at 7 o'clock at night from Seattle to London. Fortunately, however, thanks to upgrades, we have the privilege of flying first class on British. It makes the nine hour flight a lot more comfortable. After a layover at Heathrow Airport in London, we fly British at 4 o'clock in the

afternoon to Lyon France arriving at about 6:30 PM. We are driven from the airport to the Villa Florentine in Lyon. The hotel is located in old Lyon with panoramic views of the city. We will stay there until Sunday enjoying the town.

On Sunday, two days later, we leave the hotel and board the Uniworld S. S. Catherine a river ship. It is 443 feet long, holding 159 passengers named in honor of the French actress Catherine Deneuve. It is luxuriously outfitted with Murano glass chandeliers, antiques and original paintings. The ship has a lovely  restaurant, fitness center, spa, bar and the facilities you would expect on a luxury river ship. We have a large suite with a balcony. The ship 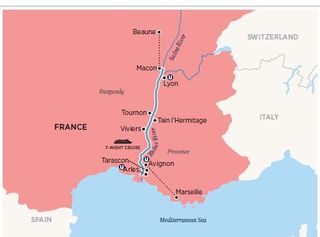 sails from Lyon with a final destination at Avignon, arriving Sunday, May 24, seven days later. The seven day river cruise features frequent stops at cities and towns along the Rhone River. At each location there are scheduled excursions of different kinds into the places where the ship stops all included in the package for the cruise.

On Sunday, seven days later, we leave the ship at Avignon and are driven to the Hotel Villa Gallici located in Aix-en-Provence. This is the area Paul Cezanne, the famous painter, frequented. This luxury five-star hotel is well known and is a five minute walk from the city center. Unfortunately we are spending only one night there on our way to our destination, the Hotel du Cap at Aix-en-Provence. The Cannes Film Festival will just be ending and the celebrities who have fully booked the hotel will be leaving as 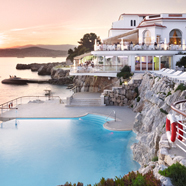 This famous five-star hotel dates back to  1889. It has been a winter escape for the rich and famous including F. Scott Fitzgerald, Ernest Hemingway and celebrities like Winston Churchill. It traditionally has been a favorite of film stars during the annual Cannes Film Festival. The hotel for many years did not accept credit cards. Cash only was the policy. Most guess had to wire money ahead of their stay because of the expense of staying there. Fortunately however, in 2006 the cash only policy was dropped and credit cards are accepted.

The main hotel is located at the tip of Cap d' Antibes on 22 acres of pine trees and tropical gardens. It houses 117 suites. In addition, there are two private villas. In 2011 the hotel underwent a $67 million renovation. The swimming pool is a heated saltwater pool located at the edge of a cliff with 33 cabanas located in the rock facing the sea. We will do our best not to be intimidated by this grand Hotel and anticipated prices.

On Thursday, after three days at the hotel, we will be driven to the Nice airport. Our British flight leaves at 12 noon for Seattle and our return trip. We anticipate a outstanding experience given the accommodations involved. Hopefully the weather will cooperate and our artificial joints (mine very old and Lita's knee very new) will also cooperate as well. I doubt that I will be able to post to this blog while traveling but I might. We are looking forward to this new experience.

0 thoughts on “VISIT TO FRANCE”